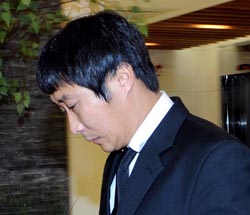 On Sunday, Kim’s father, Kim Wan-soo, who was 66 years old, passed away at a hospital in Jeonju, North Jeolla.

The deceased had been suffering from dementia for a long time, a fact often acknowledged and discussed by the comedian in interviews.

Kim has said that his father was diagnosed just as he became financially stable and ready to be a good son.

Kim’s mother also recently revealed on Kim’s reality show, “Rule of the Jungle,” that her son had been paying the bills for his father’s care for the last five years.

The funeral for the comedian’s father was held yesterday, and Kim is said to be devastated. “I really wanted my father to see me get married,” he was reported as saying.

Fellow comedians Lee Su-geun and Jeong Hyeong-don attended the funeral to show support for their friend.