Comedian apologizes for stiffing his employees

Comedian apologizes for stiffing his employees 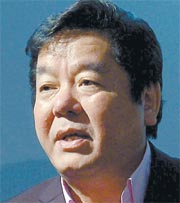 Film producer and director Shim Hyung-rae said he deeply apologizes to his employees for not paying 800 million won ($707,200) of their wages and promised he will pay back the money owed.

Shim, 53, comedian-turned-director and a living legend of Korean comedy, was accused by former employees in August of embezzling 4.1 billion won of the company’s money and not paying employees’ wages.

Prosecutors banned Shim from leaving the country in October because of the massive amount of debt he has accumulated.

Shim sat down for an interview with the JoongAng Ilbo and JTBC last week to talk about those allegations and several others, which include illegal gambling, planning to offer sexual favors from actresses to potential investors and shooting BB guns at employees for fun. It was his first media interview since the former employees’ allegations.

Shim said that his impractical investments in movies caused many financial problems and pitched his company into bankruptcy.

“I’m very sorry that I couldn’t pay the employees’ wages,” Shim said in the interview.” The building of my company [Younggu Art] was auctioned off for 4 billion won and my house is waiting to be sold at auction too.”

Regarding his poor management of Younggu Art, Shim’s movie production house, he said the company faced serious problems with debt for a long time because it failed to generate regular revenues.

Shim said he secured 5 billion won from a savings bank when he was producing the movie “D-War” in 2004, which became his biggest liability. Shim said he considered the money an investment from the bank, but the bank told him it was a loan and demanded monthly interest payments. The case went to court and Shim won a first trial but lost the appeal. Following the loss, his house and the Younggu Art building were seized by a court. Shim tried to borrow more money but failed, which eventually led him to declare bankruptcy.

Shim also admitted visiting a casino in Jeongseon, Gangwon, saying he couldn’t avoid it because some of his investors asked him to join them to talk about business.

However Shim denied two other allegations by his employees, including the claim that he kept a secret notebook with the names of about 400 Korean actresses and singers that he planned to use to attract investors by offering them sex.

“Who on earth uses that kind of notebook these days?” Shim said. “If I really had such a list, I’d put the phone numbers in my phone for better security.”

Shim also denied employees’ accusation that he refitted 10 tear gas guns to shoot BBs and fired them at employees, offering 100,000 won if they could avoid being hit.

But he admitted to playing survival games in the company’s back yard.