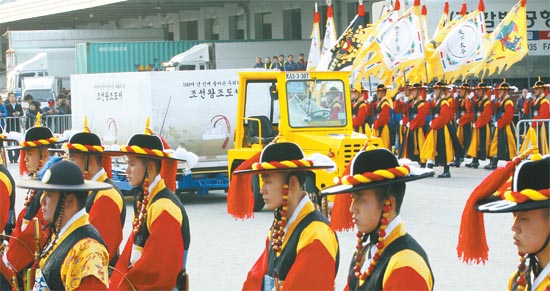 A vehicle carrying 1,200 ancient Korean books returned by Japan after almost a century carries its precious cargo escorted by a royal palace guard. The books, which arrived in two batches at Incheon International Airport, were taken to the National Palace Museum of Korea in Seoul. By Byun Sun-goo


More than a thousand ancient books looted by Japan before or during its 35-year-long colonial rule returned home yesterday as Japan followed up on a promise made last year to build relations between the countries for the future.

First Vice Foreign Minister Park Suk-hwan and Japanese Ambassador Masatoshi Muto exchanged letters confirming the return of the books at the airport. The books then were transported to the National Palace Museum of Korea in Seoul.

In a statement of apology on Aug. 10, 2010, the day that marked the centenary of Japan’s annexation of Korea, former Japanese Prime Minister Naoto Kan promised to return Joseon Dynasty books kept at the Imperial Household Agency. Three months later, the governments of the two countries agreed to the return of 1,205 books. The deadline Japan set for the return was this Saturday.

Five books were returned by current Prime Minister Yoshihiko Noda on his first visit to Korea as prime minister on Oct. 18-19.

The books returned yesterday include 167 volumes of royal protocol called Uigwe, mostly taken by the Japanese governor-general’s office in Korea in May 1922.

Among the non-Uigwe books, 938 books of 66 kinds were taken at the direct order of first Japanese governor-general Hirubumi Ito between 1906 and 1909 “for research purposes.” Ito took a total of 1,028 books at the time and 90 books were returned under 1965 bilateral treaties that Japan claimed settled all issues about cultural items looted from Korea.

A civic group calling itself the Joseon Wigwe Return Committee, which played a major role in getting the books back, welcomed their return, saying it was the equivalent of an apology by Japan for colonial rule.

“We will request the government designate the returned Uigwe books as a national treasure,” the committee said in a statement.

A total of 3,430 Joseon Uigwe books in Korea were included in Unesco’s Memory of the World Register in June 2007.

The books will be shown to the public at the National Palace Museum of Korea between Dec. 27 and Feb. 5.