Art that pops, without the Pop Art label

Art that pops, without the Pop Art label 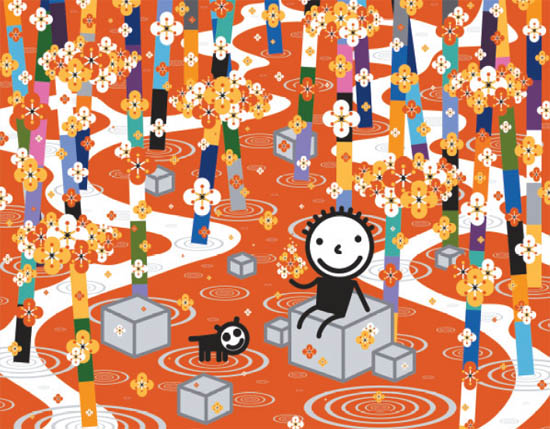 
Artist Kwon Ki-soo, best known for his smiley, round-headed character Dongguri, is tired of being called a Pop Artist.

“Many people still characterize my work as Pop Art or even animation but that is a very limited view in my opinion,” he said at Gallery Hyundai Gangnam Space in southern Seoul on Tuesday, during the opening of his solo exhibition “Reflection.”

“For example, this colorful rainbow I drew [in his painting “A Rainbow”] can be viewed as fancy and decorative, but against the grey background it serves more as a symbol of wanting to find the missing sense of hope in today’s world.”

With his new exhibition, featuring around 40 works by the artist including paintings and installations, Kwon said he hoped to show more diversity and to steer away from the Pop Art label that the Korean media have used to define his work.

“In fact, as a boy, I never owned a single comic book,” he said. “My inspiration comes more from my surroundings in Korea as well as classic Asian art.”

The artist added that in Europe and North America, the Pop Art reference is less prevalent than in Asia.

Along with influences from classic Asian art, his works also reflect heavily on urban life.

One untitled painting in the exhibition shows a number of little Dongguri characters peeking out from rectangular windows. Collectively, the work looks like a depiction of a regular apartment complex in Seoul.

“Lots of people have said to me that this painting looks like an apartment building,” Kwon said. “The aim was to portray urban life. We live in such confined, systemized spaces that have no character.” 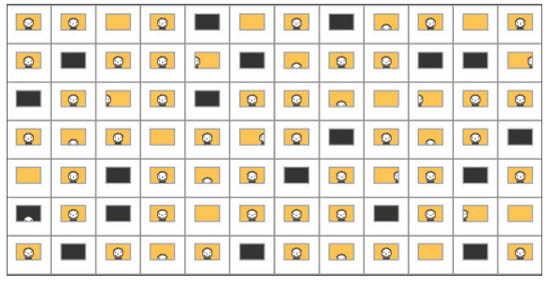 Kwon Ki-soo’s “Untitled,” above, is part of his solo exhibition, which runs through the end of the year at Gallery Hyundai Gangnam Space in southern Seoul. Provided by the gallery


Another painting, “Black Forest-Seven,” was influenced by the old Chinese legend, “Zhulinqixian,” about seven hermits that lived in a bamboo forest, secluded from the outside world. The painting looks like a bamboo drawing for the digital age, featuring multicolored bamboo trees on a glossy, black background with the Dongguri character drawn in spots.

Kwon said that this painting was the first work in his “Bamboo” series.

“The Zhulinqixian legend is about escapism and fantasy,” the artist said. “These ideas are related to what many Koreans are feeling at the moment, wanting to escape reality and yearning for a modern utopia of sorts.”

Escapism and reality, the artist explains, are the themes he wished to portray through his use of the character Dongguri. The word “donggul” in Korean means “rounded” or “circular.”

“Dongguri’s wide smile is meant to be an ironic smile. His roundness is a symbol of conforming to society, being a rounded individual, not edgy or sharp, in order to fit in,” he said, adding that it is also a way of hiding his feelings from the world.

*The exhibition “Reflection: The Mind is as Bright and Clean as a Stainless Mirror,” will run until Dec. 31 at Gallery Hyundai Gangnam Space in Sinsa-dong, southern Seoul. Hours are from 10 a.m. to 6 p.m. every day except Mondays. Go to Apgujeong Station, line No. 3, exit 2.