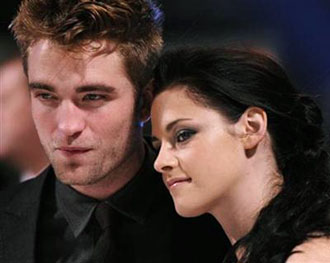 To everyday moviegoers, the millions of dollars Kristen Stewart and Robert Pattinson are paid to star in films must seem like a lot, but to the producers of the “Twilight” movies, their salaries are a bargain.

Financial Web site Forbes.com on Tuesday posted a ranking of Hollywood movie stars who earn studios the most money compared with what they are paid. The top actors, perhaps not surprisingly, starred in major Hollywood flicks that earned hundreds of millions at box offices.

Stewart, who plays Bella Swan in the “Twilight” movies that tell how Swan falls in love with the vampire Edward Cullen, ranked No. 1 on the list of “Hollywood’s Best Actors for the Buck” after being paid just $1 for every $55.83 she earned, on average, for producers.

The pair’s most recent film, “The Twilight Saga: Breaking Dawn - Part 1” has raked in $589 million at global box offices since its release earlier this month.

But remove the pair from a franchise like “Twilight,” and the financial picture changes dramatically, which is why Pattinson’s average is lower than Stewart’s.

To qualify for the list, actors must have starred in three major movies in the past five years, and films that opened after May 1 were not counted, so the most recent “Twilight” is not included. But the ones before it did play a role in the list.

Pattinson scored lower because he has been busier, Forbes.com said, working on “Water for Elephants” and “Remember Me.” Neither did very well at box offices.

Stewart, 21, had only one big flop, “The Runaways,” at box offices between her most recent “Twilight” flicks. Forbes.com did not include animated movies.

Ranked between the two “Twilight” lovers was actress Anne Hathaway, who earned studios $45.67 for every $1 she was paid for films including “Alice in Wonderland” and “Bride Wars.”