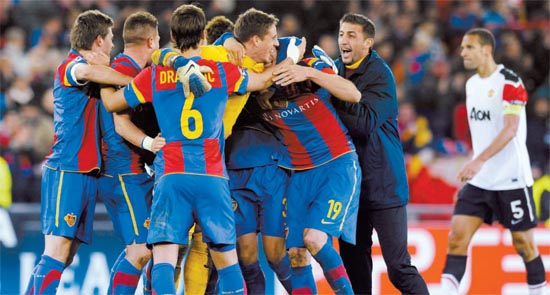 Three-time winners and last year’s beaten finalist, United only needed a draw in Switzerland against club Basel to progress from Group C but slithered to a 2-1 defeat.

So used to dining with the continents’ aristocrats in the second half of the season, the English champions now face the prospect of the less salubrious and much maligned Europa League.

At least they will have their “noisy neighbors” City for company after the rampant Premier League leaders’ first flirtation with the continent’s blue riband tournament ended in failure despite a 2-0 victory at home to already qualified Bayern Munich.

That win, which took them to 10 points from a daunting Group A, proved in vain for arguably the world’s richest club as Italian side Napoli grabbed second place with a 2-0 victory at Spanish whipping boys Villarreal who failed to register a single point.

Batefimbi Gomis scored a seven-minute hat-trick for Lyon, a new record for the Champions League, as his four goals helped the French club to a 7-1 victory over 10-man Dynamo Zagreb and second spot in Group D.

They ended on eight points along with Ajax but the Dutch side’s 3-0 home defeat by group winners Real Madrid meant Lyon achieved the seven-goal swing in goal difference they required.

Russia’s CSKA began the evening bottom of Group B but their 2-1 victory at already-qualified Inter Milan meant they rose to second after Lille and Trabzonspor played out a 0-0 draw in northern France when victory for either team would have put them into the first knockout round.

Basel enjoyed one of the greatest nights in their history as United failed to reach the knockout stage for only the third time in 17 attempts despite being in a comfortable-looking group.

“It’s a competition I’ve never been in with United, it means a lot of Sunday games [in the Premier League], that’s not ideal but that’s our penalty for not qualifying tonight,” United manager Alex Ferguson told reporters as he looked ahead to Thursday trips in the Europa League.

Marco Streller struck in the ninth minute to put the hosts ahead and Alexander Frei scored late in the second half before United pulled one back through Phil Jones to set up a nerve-jangling finale to a gripping clash.

“I’m very, very proud,” Basel coach Heiko Vogel told reporters. “Tactically, mentally, physically it was extraordinary. I will leave the superlatives to you.”

Benfica secured top spot in the group with a 1-0 victory over Romanians Otelul Galati.

Second-half goals by Gokhan Inler and Marek Hamsik were enough to secure Napoli’s passage at the expense of Manchester City, the Italians finishing on 11 points to the 10 of City.

Napoli needed victory to guarantee second place and the stress began to show as coach Walter Mazzarri was sent from the dugout for an altercation with Villarreal striker Nilmar after news of City’s lead filtered through.

Swiss midfielder Inler broke the deadlock in the 65th minute and Hamsik bundled home the second to kickstart the Napoli celebrations.

City boss Roberto Mancini said his expensively-assembled side had been unlucky to go out with 10 points.

“It was a tough group and we made some mistakes but that can happen and the [loss] in Naples did it.

“Our lives aren’t finished now, we will go into the Europa League and it is an important trophy for Manchester City.”