A ‘revolutionary overhaul’ for GNP

A ‘revolutionary overhaul’ for GNP

In the National Assembly yesterday, a group of reformist first-term GNP lawmakers issue a statement pressing its chairman, Representative Hong Joon-pyo, to step down and urging Representative Park Geun-hye, former GNP chairwoman, to play a leading role in the party. They also demanded the dissolution of the ruling party and the creation of a new political party that represents both conservatives and moderates. [NEWSIS]


Promising a “revolutionary overhaul” to save the sinking Grand National Party, its embattled chairman, Representative Hong Joon-pyo, announced yesterday a new nomination process for the April legislative elections with the possibility of removing all of its incumbent lawmakers from the ballot.

But Hong’s plans were immediately met by a chorus of criticism from reformist lawmakers within his ranks who said that nothing the chairman proposed could breathe life into a ruling party that is seemingly on its deathbed.

The overhaul, Hong said at a press conference yesterday, would focus on changing the party’s nominating system to rescue the GNP from its plummeting popularity.

“Unprecedentedly strict standards will be applied quickly to rule out candidates who are unfit ethically or professionally,” Hong said. 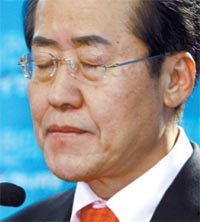 GNP Chairman Hong Joon-pyo announces a complete overhaul of the party at GNP headquarters in Yeouido, Seoul. By Kim Hyung-soo

Saying that an incumbent GNP lawmaker’s vested interests, influence and stature would not be considered, Hong announced that all of the party’s sitting National Assembly members would be subject to a performance review of their four-year term in order to run for re-election. A review board, Hong said, would be established outside of the party.

To relaunch the GNP, Hong said a preparation committee would be formed, modeled after the transformation of the Democratic Liberal Party into the New Korea Party in 1996. With hopes of launching the “new” party by mid-February, Hong said he would not be involved in the restructuring to ensure the reform’s independence.

In 1996, after a local election defeat and the arrests of former Presidents Chun Doo Hwan and Roh Tae-woo, the DLP changed its name to the New Korea Party. The next year, the New Korea Party became the GNP after it recruited some liberal members.

Another piece of reform, Hong announced, would be a revision of the GNP’s constitution to allow prospective presidential candidates to take higher profile roles in next year’s legislative campaign. Currently, prospective Blue House candidates must relinquish all party posts 18 months before the presidential election.

This last proposal, if realized, would allow Representative Park Geun-hye, the GNP’s former chairwoman and a leading presidential candidate, as well as other Blue House hopefuls from the GNP to participate in the party’s operations more actively.

In addition to changing its nomination process and constitution, Hong said the GNP’s platform and policies would be reconsidered “to balance growth and welfare and to realize justice in society.”

To compete against the increasingly united liberals, the GNP chairman said the country’s conservatives should also come together and form an alliance for the legislative elections.

“If I resign irresponsibly, the party will fall into a chaos,” he said. “Until an alternative plan is created, I will perform my duties as chairman.”

Earlier in the day, a group of reformist first-term GNP lawmakers said their party had to break up and create a new party that can represent both conservatives and moderates.

Central to their demands was Hong’s resignation and a more important role for Park.

“She should take a central role in creating and operating an emergency committee with an attitude free of her vested interests,” the reformist group, Minbon 21, said. “The emergency committee should be in charge of the party’s affairs as well as reform including the creation of a new party.”

The group of 12 lawmakers said it would take bold action if their proposal was not accepted. With Hong’s announcement yesterday and refusal to heed calls that he step aside, it remains to be seen if the reformist lawmakers would bolt the GNP.

After Hong’s press conference, the party’s reformist lawmakers continued to press for his resignation.

Representative Chung Doo-un, a reformist, also criticized Hong’s reform plan. “He has shown ugly behavior and pushed the GNP into a bottomless pit,” Chung said. “It is the sad reality that no reform and change led by Hong can be meaningful.”

Park, meanwhile, remained tightlipped yesterday on the growing turmoil in the GNP, but her aides said she was deeply considering her next move. Park and her loyalists had initially believed that she should not expose herself unnecessarily before the presidential race, but they have been reconsidering after the arrest of a GNP lawmaker’s aide on charges of ordering a cyberattack on the National Election Commission to influence the Oct. 26 Seoul mayoral by-election.

“Most GNP lawmakers think it won’t be possible for Park to remain outside the battlefront,” said Representative Lee Hahn-koo, an economic adviser to Park, said yesterday.

One reformist lawmaker said, “After three Supreme Council members stepped down, Hong has become a chairman in a vegetative state. It is a matter of time for Hong to resign, and the priority is persuading Park to make a bold decision.”