The ongoing power struggle over the future of the Democratic Party flared up yesterday after its former floor leader, Representative Park Jie-won, said he would no longer support the chairman, Representative Sohn Hak-kyu, in next year’s presidential election to protest Sohn’s push to orchestrate a grand merger of the country’s liberal parties and factions.

Calling Sohn’s road map for a merger - forged Wednesday between the DP and Innovation and Integration - a unilateral effort, Park reaffirmed his decision to cut ties with Sohn in an interview with CBS Radio yesterday. 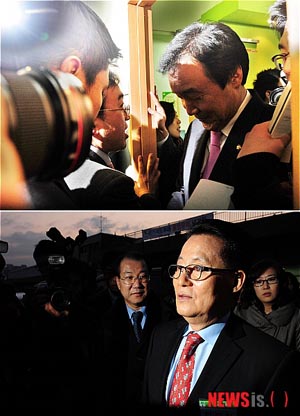 “I have maintained good political ties with Sohn, but I think they are no longer needed,” he said. “From now on, I won’t be part of his political venture.” Asked if that meant he would no longer back a Blue House bid by Sohn, Park answered, “Yes.”

The road map, which also spelled out an open primary for April’s legislative elections and rules for electing the leadership of the proposed merged party, was brokered by Sohn to merge with Innovation and Integration, an organization established by influential loyalists to former President Roh Moo-hyun for the express purpose of creating a united liberal front ahead of next year’s elections.

Park, a political heavyweight with strong influence over Jeolla voters, has fiercely criticized Sohn for having struck the consolidation plan without his consent and consultation. Yesterday, Park said it was not enough for Sohn to apologize for the deal after going around him in the first place.

Nevertheless, Sohn and Roh loyalists pushed ahead with their road map, with Innovation and Integration launching the Civil Unity Party on Wednesday to facilitate a party-to-party merger with the DP and other like-minded parties. Sohn attended the party’s inaugural ceremony and gave a congratulatory address, promoting the proposed merger as a way to open a new historical chapter for the country.

The road map for the merger, however, still needs the endorsement of Democrats at a national convention, set for this Sunday.

Asked if he would boycott the convention to derail the merger, Park said he would not resort to any lowdown tricks. “I will attend it. It’s for the leadership to worry if the convention can meet a quorum, if there will be mayhem or if the merger plan will be shot down by a vote.”

Park also said he had no power to stop protests from delegates and chapter heads opposed to the merger plan.

Dismissing criticism from some Democrats that he was an obstacle to a merger, Park said that Sohn had caused their rift by failing to respect proper procedures, stressing that he could not accept Wednesday’s deal.

Even with Park’s opposition to the merger plan, Sohn and supporters of the deal began a campaign to get the plan approved at the DP’s convention. The final roster of delegates, expected to be some 10,000 DP members, is to be confirmed today, and Sohn has encouraged chapter heads around the nation to increase the turnout.

For the convention to meet a quorum, a majority of the delegates must attend.