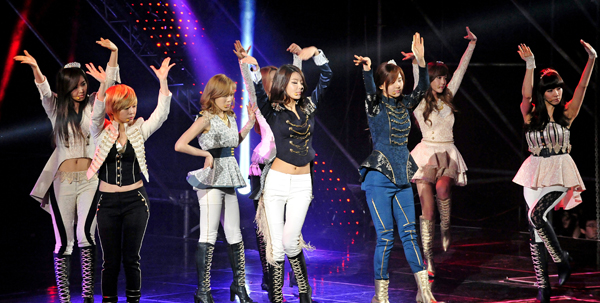 Girls’ Generation has become the first Korean girl group to present a solo concert in Singapore.

The nine-member group took the stage at the Singapore Indoor Stadium for shows on Friday and Saturday.

The “Girls’ Generation Tour in Singapore 2011” was attended by 20,000 fans, its agency SM Entertainment said.

The group was originally slated for just one concert, but after tickets sold out within four hours of going on sale, an additional date was added, the agency said.

The group started things off with the hit “Genie” and followed with other popular songs such as “Mr. Taxi,” “Kissing You,” “The Boys,” “Oh” and “Gee.”

The fans were also a part of the spectacle, as the Singaporean crowd orchestrated a display of banners that read “Girls’ Generation makes our lives complete” during a performance of the ballad “Complete.”

Girls’ Generation has previously put on solo concerts in Korea, Japan and Taiwan. On Jan. 15, the group will continue its tour in Hong Kong.