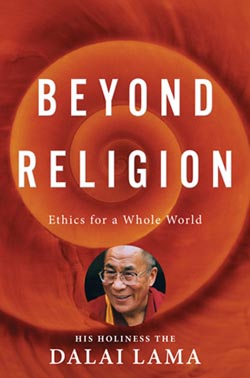 NEW YORK - For more than 40 years actor Martin Sheen has inhabited complex characters from the troubled Capt. Willard in the Vietnam film “Apocalypse Now” to U.S. President Josiah Bartlet on the hit TV drama “The West Wing.” But for one of his latest projects, Sheen, 71, did not have to reach far. The devout Catholic narrated the audiobook of “Beyond Religion: Ethics for a Whole World,” a new book by the Dalai Lama.

Sheen, a longtime social activist, spoke to Reuters about how the book’s message of compassion and universal ethics resonates with his own beliefs.


Q. How did you get into this project?

A. I have a very good agent. My agent is aware that I am a social activist and this is the kind of project I’d support because I’m a big supporter of the Dalai Lama and particularly his nonviolent stance on political and social justice issues. So it was a no-brainer. To be his voice for his book was a very special opportunity.

As a devout Catholic, how did you feel about narrating a book that calls for thinking about spirituality and ethics in a way that is “beyond religion” altogether?

You can’t separate any honest effort that is truthful. As my wife is always telling me, the truth is universal and omnipresent. You can’t question where it comes from. The Dalai Lama lives a very honest and truthful life. He’s a reflection of the Gospels, whether he would call it such or not. What he is striving to do with this book is to find a common ground in the secular world because his whole point is that the vast majority of the world is not religious or religiously inclined.

Aren’t there already a lot of ethical, nonreligious people?

Sure and I think the Dalai Lama’s book will encourage them and sustain them. It doesn’t say drop your religion; you can’t go this path and remain a Catholic or a Protestant or a Muslim or a Jew. On the contrary, it’s about your humanity. That’s where we’re all united. I think what he is trying to do is enlarge the circle. He’s trying to ensure people that they don’t have to give up anything that they believe in order to enlarge their possibilities.

How did you feel after wrapping the narration of “Beyond Religion,” at age 71, compared to how you felt, say, after wrapping “Apocalypse Now,” when you were in your 30s?

That really began my transformation into the rest of my life and basically led me back to Catholicism. I didn’t have any difficulty at all embracing the Dalai Lama’s philosophy. I didn’t have to go to a different part of myself, like a job, like I was playing somebody else. It took me three days to record it here in Los Angeles, and each day I went back I was more nourished by what I was learning.

You’ve been involved with many social justice activist campaigns. What is your take on the Occupy Wall Street movement?

I think it’s an inevitable expression of the despair and equal measure of hope that people in the 99 percent bracket have, and thank God they’re expressing it with their voice and encampments instead of with guns and Molotov cocktails. It’s outrageous what’s happening in our country. And the rich don’t get it, they don’t understand. You can’t just keep tripping over Lazarus every day that you leave your house. He’s rotting in front of your house, you’ve got to be aware of it and you’ve got to become involved. It’s a reflection of your own humanity or lack of it.

How has President Obama performed and what’s your outlook on the 2012 presidential election?

I think under the circumstances, with what he inherited, two wars, an economy in the toilet, he has done quite brilliant. I’m very confident he will be re-elected and it’s going to be a big surprise to a lot of people about how far in front he’s going to be. The people get it: they know he’s on our side. He’s a good and decent man; he’s middle class.

A free download of the book is available at www.audible.com/BeyondReligion until Dec. 20.


‘Beyond Religion: Ethics for a Whole World’