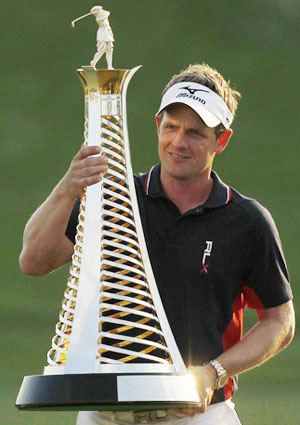 Luke Donald of England poses with the Race to Dubai trophy at the Jumeirah Golf Estates in Dubai, United Arab Emirates, Sunday. [REUTERS/YONHAP]

DUBAI, United Arab Emirates - After experiencing an emotional rollercoaster brought on by the recent death of his father and birth of his second daughter, Luke Donald didn’t seem to have the appetite to play golf.

The No. 1-ranked Donald admitted he was “rusty’’ in finishing 10 shots off the pace at last week’s Nedbank Golf Challenge in his return to the game after a five-week break. His nearest rival for the European money title, Rory McIlroy, kept the race alive with a win at the Hong Kong Open. Then, Donald arrived at the Dubai World Championship and endured an error-prone first round that left him in 26th place.

The 34-year-old Englishman, who won the American title earlier this year, had to finish better than ninth or hope McIlroy didn’t win the tournament.

But by Friday, the Donald that fans had become accustomed to had returned. He started hitting magical approach shots and sinking putts, moving up to 12th on the leaderboard while a fatigued-looking McIlroy began slowly self-destructing.

The 22-year-old McIlroy went into the water on the 18th in the second round and never recovered. He ended the tournament at 9-under in a tie for 11th, while Donald strung together two straight rounds of 66 on Saturday and Sunday to finish in third place and become the first golfer to win both the European and American money titles.

“It’s something that I didn’t think was possible,’’ Donald said of the historic double. “I played extremely solid, consistent golf all year winning four times and playing right at the right moments. I think it is testament to my hard work and it’s nice to see it paying off.’’

Alvaro Quiros won the tournament with a 19-under total of 269, two shots ahead of Paul Lawrie of Scotland.

The No. 2-ranked McIlroy had all but conceded the Race To Dubai money title Saturday, after finishing with a 1-under 71. That left the Northern Irishman in a tie for eighth Saturday and six shots behind Quiros.

Winning the elusive double wasn’t a goal for Donald at the beginning of the year, but he said it started creeping into his mind after he won the BMW PGA Championship at Wentworth in a playoff over Lee Westwood in May. Donald rose to No. 1 with the win, becoming only the 15th player to reach the top ranking in 25 years.

Donald has won three other titles this season, including the Children’s Miracle Network Hospitals Classic at Disney where he snatched the U.S. money title from Webb Simpson. That put him on course for unprecedented success on both money lists.

“This is what I wanted. I think this is something that became possible probably midway through the season and it’s something I thought about,’’ he said.

“It’s driven me to work hard and it’s helped me to be as successful as I have been and especially the last half of this year. You know, to actually have it happen is a different thing. It feels almost a weight off my shoulders.’’

The Englishman credited his recent success to his consistency, ability to hold up under pressure and winning big tournaments.

“Success breeds more success,’’ he said. “Any time you are doing well, you are able to feed off that. You know that when the pressure is at the most, you’re able to come up with the shots. I obviously did that.’’

But even with his historic double, Donald knows there will be critics out there who insist he isn’t deserving of the top ranking because he hasn’t won a major. For them, Donald said the time will come.