A Filipino Christmas far from home

A Filipino Christmas far from home 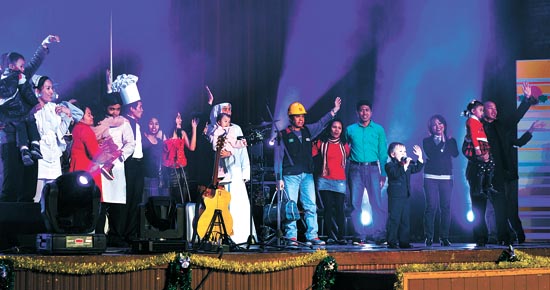 
Lea Salonga and Charice Pempengco may be famous Filipina songstresses worldwide, but in one high school auditorium migrant workers from the Philippines amazed the crowds with their vocal prowess during the first Filipino Christmas singing contest in Korea. The contest was an early holiday celebration for those away from their homeland.

Some 500 members of the Filipino community in Korea, as well as Korean friends, gathered for the “Himig Pasko Tinig Pinoy: The PIKO Christmas Song Festival 2011,” in the Dongsung High School auditorium, in Hyehwa-dong, central Seoul, on Dec. 4.

The Christmas concert was organized by Pinoy Iskolars Sa Korea (PIKO), a nonprofit organization for Filipino students studying in Korea founded in 2006, with the support of the Philippine Embassy and the Seoul Global Center.

With an “American Idol”-esque set up, a panel of judges, including the Ambassador of the Philippines and a priest, scored 21 contestants who belted out Christmas carols to compete for a prize of 1 million won ($886) for first place, 500,000 won for second place, 250,000 won for third place and 150,000 won for fourth place. A popular choice was also voted for by the audience, while each losing contestant received a consolation prize.

The Seoul Global Center and the Waterdrop organization also hosted an international fashion show in between the performances to share the traditional dress of ten countries, including the Philippines. Meanwhile, a dance troupe comprised of Filipino women married to Korean men performed for the finale.

Fourth-place winner Alex Custodio, 33, who has worked in cement manufacturing for four years in Korea, stated, “We have a tightly knit community here, and we stick together.” He is a part of the EPS Filipino Workers Association, which he estimates has around 1,700 members.

Fellow EPS Association member Benjie Delmundo, 30, who works assembling car parts, and provided backup vocals for Custodio, expressed how important Christmas is back in the Philippines by saying, “I miss family during the holiday season. But having this sort of event organized by PIKO helps us forget the loneliness.”

In Korea, there are over 100 Filipino organizations, including religious and nonsectorial groups, according to the Philippine Embassy.

The Philippine Overseas Employment Office estimates there are around 27,000 Filipino workers under the Employment Permit System (EPS) in Korea, but the actual number of Filipino workers in Korea may be higher because of workers not registered with the EPS.

Some participants came from outside Seoul, including Warly Arciaga, 46, one of the contestants and also a member of the Bucheon Filipino Migrants Community.

“Our community is very close and came to Seoul on one bus from Bucheon [in Gyeonggi],” said Arciaga, who has been singing part-time in Korea for the past ten years, as was evident by the loud cheering from one section of the auditorium after his number.

The ambassador of the Philippines to Korea, Luis T. Cruz, stated, “I just came back from a seminar in Jeju on ‘Transition to Multicultural Society.’ For Korea to be truly a global society is a two-way stream, where foreigners should be exposed to Korean culture, and Koreans as well should be able to learn about other cultures. The event today is the Philippines’ contribution.”

He paused. “You may have noticed that all the songs today are not upbeat but the lyrics are very sad and pensive. They express the sentiments of the migrants away from home.”

A 25-year-old contestant, Mary Joy Lor Tungala, stated after her performance, “I was very nervous on stage. I gave birth in November, so I didn’t have a lot of time to prepare. My baby is watching in the audience.” However, she captivated the audience with her rich voice.

A member of the Hyewadong Council, Tungula volunteers at the Hyewadong Choir which consists of 42 Filipinos. She came to Korea two years ago and worked at a sock factory but is a full-time mom at the moment.

The song she sang, “Sa Araw Ng Pasko (The Day of Christmas),” relates Filipino Christmas traditions that can’t be followed because the person is too far away from home and is a popular song for overseas Filipino workers. Crowd favorite David Buctot, a four-year-old natural on stage, and the youngest contestant of the night, charmed the audience with another rendition of this song.

Meanwhile, people outside of the Filipino community were provided an opportunity to not only enjoy a Christmas concert but to witness the bond of migrant workers and multicultural families.

Kim Sung-min, 30, who has a Korean father and a Japanese mother, attended the concert with a Korean friend and said, “I too come from a multicultural background, so I seek out a lot of events like this normally.”

Secretary of PIKO, Dianne Despe, 22, who is currently studying for her masters at Kyung Hee University, claims that the organization has 300 members registered, but there would likely be over 500 students currently studying in Korea. She stated that this concert is a means of raising funds for future PIKO events, including education on Filipino culture in Korean elementary schools, and also to let the student organization be known to the Filipino community.