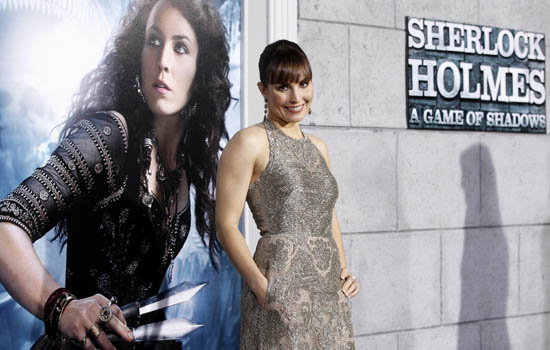 BEVERLY HILLS, California - Maybe it was inevitable that whoever landed the lead in the original “Girl with the Dragon Tattoo” would become Sweden’s next big export.

Yet with or without a blockbuster role, Noomi Rapace always felt she would break out beyond the borders of her homeland.

Two and a half years after the debut of “Dragon Tattoo,” the first of her three eye-popping turns as late author Stieg Larsson’s untamed heroine, Rapace has stormed into Hollywood in Robert Downey Jr.’s latest Sherlock Holmes adventure and Ridley Scott’s “Prometheus,” a cousin to his sci-fi hit “Alien.”

Rapace felt right at home among Downey’s ensemble for “Sherlock Holmes: A Game of Shadows,” while she grew up on “Alien,” “Thelma & Louise” and other films from director Scott.

“Ridley Scott is one of my heroes since as long as I can remember. I kind of actually think that he saved me sometimes because I always felt like an outsider in Sweden. I didn’t feel Swedish. I always felt like something is different with me,” Rapace said in an interview to promote “Sherlock Holmes,” which opens Friday. “The Swedish people are quite repressed, and they hold back a lot of things. It’s like people are really afraid of conflicts and emotions, and nobody really says anything straight to you. ... So in a weird way, I always felt that I was going to leave kind of what I came from. But I could never imagine I was going to end up with these people and doing movies with the best people in the world.”

Rapace, 31, appeared in her first movie at age 7 while living in Iceland before her family moved back to Sweden, and she has been acting for the past decade.

But it was her performance as brilliant, traumatized, ferocious and feral computer hacker Lisbeth Salander in “The Girl with the Dragon Tattoo” that was her exit visa from Sweden.