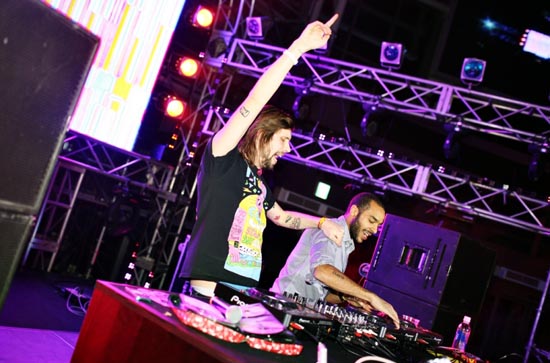 Saturday and Sunday: The top 11 contestants from season three of the popular show “Superstar K” reunite for an end-of-year concert.

Dec. 24 and 25: The four-member band’s holiday concert will reintroduce them to fans after a year of inactivity. 2AM is one of the two subgroups that branched out from the 11-member boy band One Day; the other is 2PM.

Metheny, the winner of 18 Grammy Awards, is one of the most critically acclaimed jazz musicians of the 1970s and ’80s and came to prominence as the leader of the Pat Metheny Group.

To Saturday: Shakespeare’s “Hamlet” is transformed into a musical and will be performed in Korean.

Today to Dec. 29: “Annie,” the recipient of the award for best musical at the Korean Musical Awards in 2007, is back in theaters.

First introduced to Korea in 2006, “Annie” delivers its warm message again this winter through the story of the feisty young orphan who wins the heart of a billionaire industrialist. The original Broadway production garnered seven Tony Awards, including best musical, after it opened in 1977.

Dec. 21 to 31: Universal Ballet company brings its version of the traditional holiday production to theaters this month.

Along with “Swan Lake” and “The Sleeping Beauty,” “The Nutcracker” is one of the three great ballets composed by Peter Tchaikovsky. UBC has presented “The Nutcracker” every year since 1986. Its version is adapted from the one choreographed by Vasily Vainonen in 1934, with further adaptations by Oleg Vinogradov.

Dec. 24 and 25: This one-man show is based on David Sedaris’ acclaimed essay that humorously relates his short-lived stint working as an elf at Macy’s department store one Christmas. The show will be performed by the talented Daniel Kennedy and is directed by Desiree Munro and produced by the Probationary Theater Company.

It will be performed entirely in English with Korean subtitles.

Dec. 31: Asian-American electro hip-hop group Far East Movement is putting together this hip-hop and electronic music festival to celebrate the New Year. Six teams of artists will perform at Vista Hall, while four teams perform at the Walkerhill Theater.