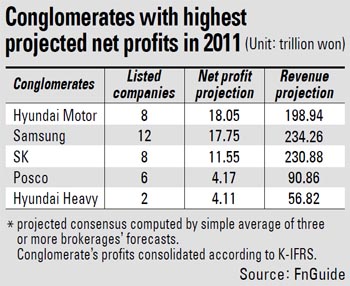 As Dec. 31 approaches, ‘tis the season for stock analysts to announce their projections for Korean conglomerates’ balance sheets during 2011. And this year, an upset in the perennial pecking order seems likely as Hyundai Motor Group edges past Samsung Group in the stock market’s annual net profit projections for the first time.

According to investment analysts’ average projections of the profitability of Korea’s largest conglomerates in terms of market capitalization, the consolidated net profit of Hyundai Motor Group’s eight listed firms under International Financial Reporting Standards was forecast at 18.05 trillion won ($15.52 billion).

This was greater than the 17.75 trillion won in net profit forecast for Samsung Group’s 12 listed firms as compiled by financial data provider FnGuide yesterday.

Samsung Group’s fall from the top spot in terms of net profits was due to the lagging performance of flagship company Samsung Electronics’ liquid crystal display (LCD) business, analysts said.

On the other hand, Hyundai Motor Group’s affiliates not only had hit new models on the market, but saw additional benefits from volatile won-dollar currency exchange rates that had worked in its favor as its U.S. dollar earnings increased.

“Samsung Electronics’ display panel business had reported more than 2 trillion won in operating profits last year, but this year it is expected to report about 300 billion won in losses,” said Kim Sung-in, head of IT analysis at Kiwoom Securities.

“[The company is] putting up a good defense as its smartphone business is doing comparatively well.”

Oh Sung-jin, an auto sector analyst with Hyundai Securities, added that, “Hyundai Motor Group has improved in its market share due to a confluence of new car models and the exchange rate effect.”

However, Samsung Group was still the top dog in many respects, as it has earned more revenue and operating profit, according to analyst consensus.

Samsung Group was also expected to regain its No. 1 ranking in terms of net profit next year, with 22.01 trillion won in net profits projected by industry analysts during 2012, greater than Hyundai Motor Group’s 20.2 trillion won.