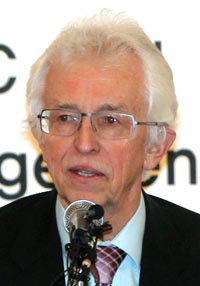 North Korea is racing ahead with its nuclear weapons program and the risk to the world will mount unless the six-party talks on its denuclearization resume quickly, according to a U.S. expert on the North’s nuclear program.

Siegfried Hecker, a Stanford University professor, said at a forum in Seoul that he suspects the North is only one nuclear test away from being able to mount a nuclear warhead on a missile.

“If North Korea conducts a third nuclear test, that will be very risky,” Hecker told a breakfast forum in Seoul. “If another of the North’s nuclear tests is successful, I believe that North Korea will succeed in the necessary miniaturization within a few years.”

Hecker is one of the world’s most knowledgeable scholars about the North’s nuclear program. He has visited the North seven times, including in November 2010, when he was shown the regime’s secret uranium enrichment program. 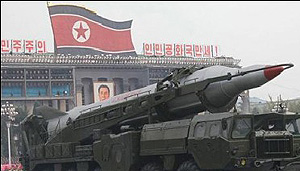 The North, which conducted two nuclear tests in 2006 and 2009, is suspected of running the uranium enrichment program to get a second source of fuel for nuclear weapons aside from its plutonium program. The North claims the uranium program is for peaceful, civilian purposes.

On Nov. 30, North Korea said through it state-run media that its uranium enrichment program and experimental light-water reactor were in progress.

At the Seoul forum, Hecker demonstrated that progress by presenting satellite photos of the new nuclear facility in different phases over the past year.

He called the stalled six-party talks the only and best way to tame the North’s ambition to develop nuclear weapons. “It is critical at this point to bring Pyongyang back to the table to stop expanding its nuclear weapons programs,” Hecker said. “The most urgent step is to stop it from conducting another nuclear test and more missile tests.”

The six-party talks, which include the two Koreas, the U.S., Japan, China and Russia, have not been held since the North withdrew in 2009.

The North is demanding a resumption of the aid-for-denuclearization talks, but Seoul and Washington want several measures to prove its sincerity, such as the suspension of the uranium enrichment program and a moratorium on nuclear or missile tests.

In a meeting with local media after the forum, Hecker did not say whether the six-party talks should be held with or without the North taking those measures, but those conditions would be required at a certain point of time as confidence building measures.

Hecker said he is also concerned about the safety of the light-water reactor the North is building because although the North has a track record of handling reactors with relative skill, it is dealing with an entirely different kind of reactor. He said if the nuclear program reaches a critical threshold, that could pose substantial dangers because the regime is too isolated to have learned lessons from previous nuclear accidents in the U.S., Chernobyl and Japan.

“North Korea is not connected to this world network, and that’s the part I am concerned with,” he said. “They would need to learn from the rest of the world community how both to do the design, do materials properly, operations and in case something happens, to be prepared to respond to the emergency.”