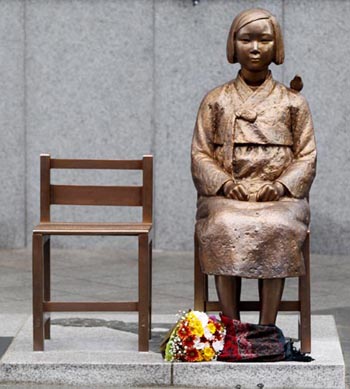 The Peace Monument, a sculpture of a teenage Korean girl representing the former “comfort women,” was erected on Wednesday in front of the Japanese Embassy in Seoul. Japan asked Korea to remove it. [YONHAP]

The diplomatic row between Korea and Japan over the wartime sex slave issue deepened ahead of a bilateral summit between their leaders this weekend.

In a rare move, Tokyo yesterday lashed back at Seoul’s accusation that Japan has not responded to its long-standing demands for an apology and compensation to the so-called “comfort women,” who were forced into sex slavery for Japanese soldiers during World War II.

“The Japanese government delivered its legal stance to Korea clearly,” said Shinsuke Sugiyama, director general of the Asian and Oceanian Affairs Bureau at Japan’s Ministry of Foreign Affairs, during a media briefing at the Japanese Embassy in Seoul. “We can win the understanding of international society.”

The issue of the comfort women resurfaced as the women and their supporters had their 1,000th weekly protest outside the Japanese Embassy Wednesday.

During the event, the women and their supporters erected a statue of a teenage Korean girl, which they called the Peace Monument, in front of the Japanese Embassy.

Japan insists that 1965 treaties exempt it from paying individual compensation for wrongdoings during its 1910-45 colonial rule of the Korean Peninsula, including issues that emerged later, such as that of the comfort women.

Korea, which claims the comfort women issue is separate, sent an official request to Japan in September for official talks to resolve interpretational differences of the treaties. Article 3 of the treaties leaves room for negotiation. “The Japanese government, instead of just demanding the removal of the Peace Monument, should think about why these victims have been demonstrating every week, and whether there aren’t measures to restore their honor,” Korea’s spokesman at the Ministry of Foreign Affairs and Trade, Cho Byung-jae, said at a media briefing yesterday.

At the briefing, held minutes after Sugiyama’s statement, Cho reiterated Seoul’s stance that Japan still owed a response to the request for negotiations. “There has been no answer for the past three months,” he said. “We are waiting for an official response.”

He continued: “We reconfirm our basic stance that the comfort women issue is a fundamental problem regarding women’s right and humanitarianism and cannot be resolved through the 1965 agreements. We urge once again the Japanese government to respond to the dispute resolution process based on the treaties.”

Cho said he expected President Lee Myung-bak to raise the comfort women issue during his summit meeting with Japanese Prime Minister Yoshihiko Noda scheduled for this weekend. Cho said Seoul would have no choice but to move to an arbitration process unless Tokyo makes a response, but declined to comment on a time frame.