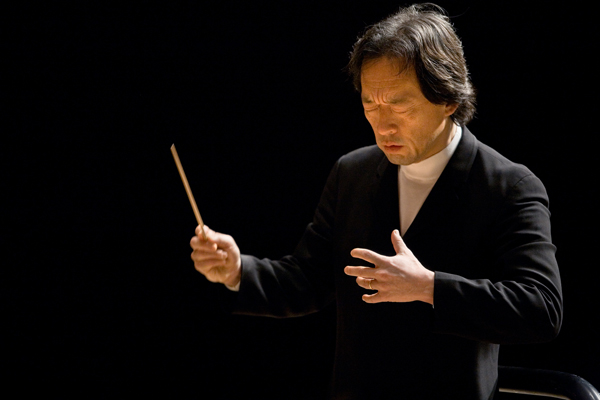 Following weeks of heated controversy over the size of the 2 billion won ($1.7 million) salary he received in 2010, Maestro Chung Myung-whun of the Seoul Philharmonic Orchestra verbally agreed last Friday to the Seoul Metropolitan Government’s request to cut 700 million won from his salary next year.

The settlement was announced after Chung had lunch with newly elected welfare-savvy Seoul Mayor Park Won-soon. The 700 million won reduction will include the three controversial business round-flight tickets to Europe for his family members, salary for his secretary based in Europe and his official expense account.

“Seoul Mayor Park Won-soon has asked maestro Chung to continue his role at the SPO and demanded that Chung does his best to foster his successor in preparation for a time when his term will be over,” Ahn Seung-il, director of the city government’s culture and tourism department, told reporters after the meeting.

Maestro Chung’s three-year contract ends later this month and he has yet to sign the contract to renew his term by three another years. Whether he will actually sign it will be decided after the orchestra’s board meeting on Friday, according to Kim Jin-young, a spokeswoman with the orchestra. The official signing is seen to be made next Tuesday and the city government officials admitted currently there is no alternative for Chung.

The press release from the SPO last Friday said Chung’s basic salary for next year will be 242 million won, a freeze from this year, and he will additionally receive 42.5 million won each time he leads the city-run orchestra, up 5 percent from this year.

The 58-year-old pianist-conductor also agreed to lead the orchestra for free when it comes to the so-called “visiting orchestra” programs, in which the whole orchestra visits public venues such as hospitals, schools and libraries to perform for free. Until this year he was paid half of the 42.5 million won every time he took the podium for the public welfare program.

The SPO expects Chung to lead his orchestra about 32 times next year. “The size of payment given to maestro Chung is highly correlated with how many times he conducts,” said the release.

The controversy over Chung’s salary was sparked when Chang Jung-sook, a member of the Seoul Metropolitan Council who belongs to the main opposition party, unveiled the details of the salary during the council’s administrative audit on the orchestra on Nov. 17.

“Seoul citizens’ taxes have been diverted to groundless and unsubstantial purposes,” she claimed, adding the maestro was receiving “too much.”

The remarks then spread into a heated debate over whether or not Chung’s salary is appropriate for a world-class conductor.

Chin Jung-kwon, a current affairs critic and aesthete, wrote on his Twitter, which more than 160,000 people follow, “Is it too much of a luxury for an OECD member country that ranks top 10 in terms of economic size and a global IT powerhouse to have an orchestra that it doesn’t need to be ashamed of?”

Kim Jae-hyun, an entrepreneur and classical music enthusiast, said, “I just don’t understand why some people are calling into question the level of maestro Chung’s salary and dismiss the remarkable achievement he has made.”

The winner of the second prize in the International Tchaikovsky Competition in 1974 as a pianist, Chung has been at the helm of the SPO since late 2005. From 2000 until present, he has also been music director of the prestigious Orchestre Philharmonique de Radio France.

The maestro is widely praised for having made a major contribution to improving the orchestra’s performance level drastically in a short time. The revenue the orchestra made this year amounted to 5.37 billion won - compared with 137 million won six years ago.