Smokers to have fewer places to puff

Smokers to have fewer places to puff 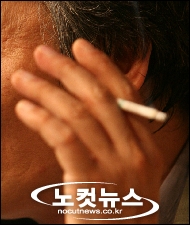 Seoul has added sidewalks and school zones to its list of nonsmoking zones.

The Seoul Metropolitan Council announced yesterday it has provided a revised ordinance that broadens the city’s nonsmoking zones, aiming to heighten public awareness of secondhand smoking in public areas and streets. The council said that the new ordinance is expected to go in effect in late February. Under the revision, citizens will be fined 100,000 won ($86) if they are caught smoking on sidewalks. It said that the ban on sidewalks will have a three-month grace period.

The existing nonsmoking rule has banned smoking in three major public squares, including near Cheonggye Stream, Seoul City Hall and Gwanghwamun, and 20 city-operated major parks. Starting this month, 314 bus stops also became nonsmoking zones. As the government keeps expanding the nonsmoking zones, people have spoken in favor as well as against the ordinance.

“The new rules treat smokers as criminals,” a spokesman from the Korea Smokers’ Association told the JoongAng Ilbo. “Every time we want to smoke, we need to walk out of buildings, and we haven’t complained about it very much, but the new rule is too much and unfair.”

Seo Hong-kwan, the chairman of the Korean Association of Smoking & Health, welcomed the government’s action, saying “The ordinance should have appeared earlier because so many nonsmokers are suffering from secondhand smoke.”