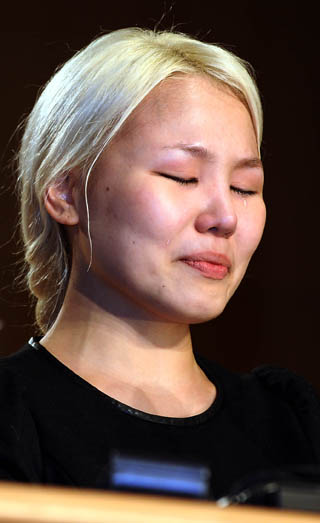 Singer ALi’s apology to rape victim Na-young led to the singer making a startling confession of her own.

Following the press conference on Friday where the female singer revealed her own secret shame in order to defend her intentions for producing the song “Na-young,” the starlet met up with the parent of the child the song was named after.

The song in the emerging singer’s first album aroused great controversy earlier this month. Netizens blamed ALi for not consulting with Na-young’s family before the song was released. They said it could hurt the mind of the child victim and her family by stirring up her memories of the crime. In addition, the ambiguous lyrics of the song made netizens angry. The father of Na-young also expressed displeasure about the song in a media interview.

Na-young was brutally assaulted in 2008 at the age of eight, to the point of suffering permanent bodily damage. The song contained lyrics such as, “Robbed of your youth, living without a body nor soul, your miserable life.”

Then the singer said in a statement that she would withdraw the album and delete the track off the list, apologizing to Na-young’s family and explaining that she had no intention to hurt them.

Still, the criticism against her didn’t cease. Many netizens claimed ALi was using Na-young for commercial purposes. However, the real surprise came when at the press conference on Friday, ALi confessed that she too, had been raped.

Then, on Saturday at an entertainment agency in Gangnam, ALi came face to face with Na-young’s father. While the shy Na-young - “Na-young” is not the girl’s real name - remained in the car, the singer apologized in person about the ordeal she put Na-young and her family through by the inclusion of the song on her now-recalled album.

According to local media ALi told the victim’s father that because both she and Na-young were sexually assaulted in the same year, the star felt an affinity toward the young victim which led to penning a song for her.

The misunderstanding between the two parties was resolved according to local media as Na-young’s father consoled the singer with flowers and kind words.

“It must have been so hard on you. I heard what you said at the press conference yesterday.”

Na-young’s father explained that at first he was furious that they weren’t consulted before the song’s release.

“In addition to it all, when I heard that she’d been through the same nightmare as my daughter, all I could think was that I wanted to console her,” Na-young’s father told local media.

The two parties talked for about an hour before they parted ways with ALi handing over a gift bag of goodies for Na-young. The singer also apologized to Na-young from outside the car where the child could not be seen.

On Friday, ALi attended a press conference with the support of her father who read out a statement containing the singer’s sentiments.

The press event held at Sangmyung Art Center in Hongji-dong, Seoul, was an initiative taken by the star to make a formal apology following the controversy of a track featured on her debut album “Soulri” released on Dec. 13.

The public was outraged as what many claimed was poor lyrical taste and netizens claimed ALi was exploiting the victim for commercial purposes.

At the 15 minute event, the singer’s father read out a statement on behalf of the repentant singer who was dressed in black and seen sobbing throughout the speech.

“I wrote the song because I thought that I knew how Na-young felt. I wanted to console her, having been through it myself. Instead of being able to console Na-young and raise awareness of sexual abuse, I was accused of being heartless and using Na-young as a commercial tool.”

The 27-year-old singer revealed to the public for the first time that she was punched in the face and raped while she was unconscious.

“In 2008 I was raped by an acquaintance who pleaded not guilty through all three trials. The perpetrator received just four years in prison with two years probation and 200 hours of community service. Given the nature of the crime, I don’t think that’s enough.”

Due to there being no witnesses to the crime, the singer said the attacker wasn’t charged for causing bodily harm despite the fact that it took four weeks for her to heal from the attack. An apology was not issued to ALi by the perpetrator and the vocalist made it known that she is currently in the process of filing for a civil suit.

“I guess because both Na-young and my incidents happened in the same year, I felt a sense of empathy towards her and although I had good intentions writing the song, maybe my expressions weren’t as articulate as I intended it to be.” The artist took the opportunity to apologize to the young victim as well as to her family and the public at large.

The singer also said singing was the one thing that helped her get over the dark times that followed the sexual attack.

“There were times when I couldn’t cope with the shame. I wanted to end my life, but music saved me. Please, let me be able to do what I love”

The singer said she intended for her past to be a secret she would take to her grave but due to the unfolding of events since her album’s release she decided to make it known.