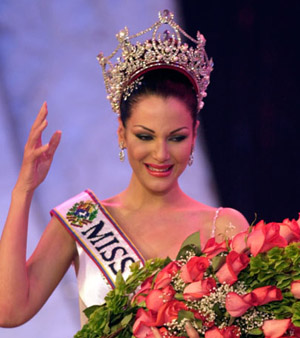 Her family said Ekvall died Saturday at a hospital in Houston, Texas.

Ekvall was crowned Miss Venezuela at age 17 in 2000, and the following year she was third runner-up in the Miss Universe pageant in Puerto Rico. She went on to work as a model, actress and television news anchor.

She also authored a book, “Fuera de Foco’’ (“Out of Focus’’), about her struggle with cancer, which included images by Venezuelan photographer Roberto Mata.

She told the newspaper El Nacional in an interview last year after the book was published that “I needed to send the message of the need for cancer prevention.’’

On the cover was a portrait in which she appeared with makeup and her head shaved. The book also included images of her while going through chemotherapy.

“I hate to see photos in which I come out ugly,’’ Ekvall told El Nacional. “But you know what? Nobody ever said cancer is pretty or that I should look like Miss Venezuela when I have cancer.’’

At the time, she was hopeful of overcoming cancer and wanted to write more.

Ekvall’s family said in a statement Sunday that her remains were being cremated in Houston on Monday and that a service is to be held in Venezuela once her remains are returned to the country.

Ekvall said in a 2007 interview published in Venezuelan news media that although her mother is Jamaican and her father is American of Swedish and Hungarian descent, “I feel more Venezuelan than anybody.’’

She was married to radio producer John Fabio Bermudez and had a 2-year-old daughter.

In her book, Ekvall had described her joy at the birth of her daughter saying “that happiness, although [the daughter] may not know it or understand it, keeps me alive today.’’

Her death brought an outpouring of condolences from Venezuelans, including from some prominent artists and politicians who praised her in messages on Twitter.