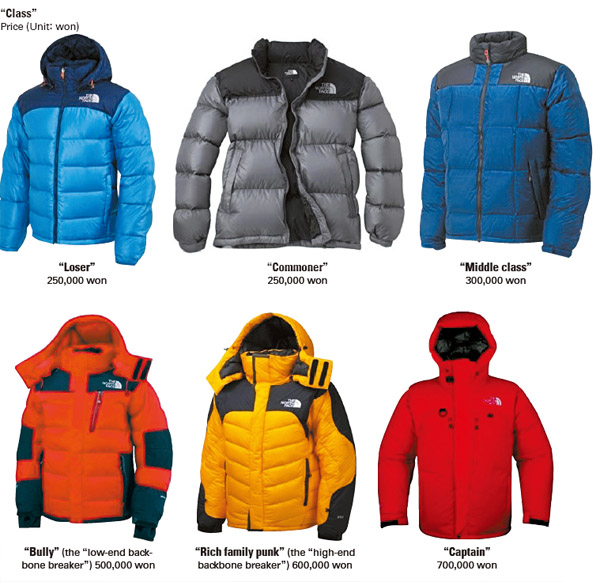 Parkas are by no means new to Korea, but The North Face brand has emerged as the one of the hottest status symbols among its middle and high school students.

A recent posting on leading search portal Naver, uploaded by Korean students, lists six of the jackets by the U.S. outdoor apparel label in terms of price and status. It describes the list as a “class map” (class in the social, not academic, sense).

The four jackets in between are associated with the terms “commoner,” “middle class,” “bully” and “punk from rich family.” The latter two are, humorously, defined as “low” and “high” levels of “backbreaker” - a reference to the financial burden placed on parents who feel compelled to fork out their earnings on them.

While the posting started out as a joke, however, it is becoming controversial and stoking fears that it is reflecting, creating or exacerbating unwelcome class distinctions among students.

“Even students do not feel that they are equal,” said Shin Kwang-yeong, a sociology professor at Seoul’s Chung-Ang University. “There is a hierarchy among students according to grades and appearances. Clothes, or other consumer goods like shoes and backpacks, simply feed this artificial hierarchy.”

He said that a hierarchical system of seniority has long been a tradition in Confucian-steeped Korean society, but it was alarming to see this trickle down to adolescents. “In Korean culture, hierarchy is valued. Costly products such as outdoor goods and bicycles that are popular among adults have also become popular among adolescents and this is [sending the wrong message] to students,” he said.

The jackets have become so popular that they are now lightheartedly referred to as a second school uniform in cash-rich Korea, where The North Face ranks as the No. 1 selling outdoor brand.

“Out of 37 students in our class, 15 of them wear a North Face jacket,” said one high school student in Seoul. “If you don’t wear jackets sporting some kind of brand, you look shabby.”

Youngone, a company that distributes the brand, downplayed the mounting controversy. “It was only a joke by young students, but people are taking it too seriously,” said one employee, who attributed the popularity of the product line to its quality.

Observers, on the other hand, claim that more students are coming under pressure to purchase the brand to have a sense of belonging as peer pressure sets in. Some say the latest fad is more serious than past cases.

“There was a time in the 1980s and 1990s when sales of Nike shoes and Jordache jeans were booming, but that was caused by a simple desire for foreign products and vanity,” said Jeong Hee-jun, a sociology professor at Dong-A University. “But the North Face phenomenon is driven by a sense of desperation to avoid being left behind.”

Many see this as emblematic of Korea’s increasingly competitive society, which has been exacerbated in recent years by a tightening job market.

Schools and teachers expressed concern over the phenomenon.

“At first, I thought students just wanted to wrap up warm, but now it has become a trend and it is compared to a uniform,” said the principal of one high school in Yongin, Gyeonggi.

“The North Face brand is so expensive that not all students can afford it. And many feel left out.”

Another teacher added, “Even if I tell them it is not always good to buy expensive clothes just because other students wear them, none of the kids listen.”