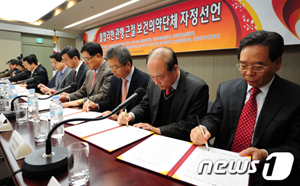 Over a dozen of the country’s various health industry associations pledged yesterday to not engage in illegal kickbacks, but the Korean Medical Association refused to sign on, saying that kickbacks were a normal part of the market economy.

Gathering at the Press Center in central Seoul, the organizations issued a “self-proclamation” that acknowledged the practice of giving or receiving kickbacks while selling medicine or medical equipment as illegal. “[We will] eradicate such illegal practices and gain back the trust from the public,” the statement read.

In exchange for the pledge, the associations requested the government for realistic insurance fees to ensure normal operations of hospitals, clinics and pharmacies and to expand support in research and development for new drugs and medical equipment.

But the Korean Medical Association, which represents the nation’s doctors, issued a statement on Monday saying that while they “don’t oppose eradicating illegal practices or receiving money or gifts, kickbacks are one form of dealing in the market economy, which should not be a problem.”

Han Dong-seok, spokesman for the KMA, said yesterday, “If it’s considered illegal for a doctor to receive rebates, wouldn’t receiving discounts when purchasing mobile phones also be considered as a rebate?”

The spokesman said the KMA would participate in the pledge if the government eliminates the law punishing those giving or receiving kickbacks with a maximum prison sentence of two years or a fine of up to 30 million won along with a suspension of one’s license for a year. The law went into effect in October 2010

Such illegal kickbacks have long been accused of being the main reason for high drug prices as doctors and pharmacists prescribe certain drugs based on the kickbacks they get, even if there are better ones available.

Saying yesterday that it “welcomed” the pledge, the Ministry of Health and Welfare said that it would “make efforts to establish a system so that transparent and fair dealings are possible.” The ministry has been trying to stop such practices, insisting that kickbacks “limit the patient’s right to choose the best drug.”