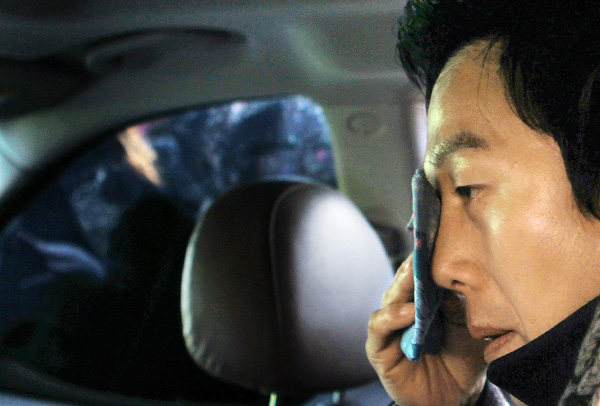 Former Democratic Party lawmaker Chung Bong-ju, better known as the co-host of a popular podcast dedicated to taking potshots at President Lee Myung-bak, was convicted yesterday of spreading false rumors about Lee when he was running for president in 2007.

Upholding a lower court conviction against Chung, the Supreme Court yesterday rejected the 51-year-old politician’s appeal and sentenced him to one year in prison.

“When someone wants to actively raise suspicions against someone who is denying it, he should have presented specific and convincing evidence, not just rumors,” the Supreme Court said in its ruling. “If not, he should be held accountable for making false accusations.”

Nicknamed the “BBK sniper,” Chung raised a series of allegations of financial frauds against Lee, then the Grand National Party’s presidential candidate, on the eve of the 2007 presidential elections.

Chung claimed that Lee was involved with investment firm BBK, which went bankrupt and wiped out investments by 5,200 investors in 2000. Lee’s former business partner, Kim Gyeong-jun, was also involved and Lee was fiercely attacked during the presidential election about the scandal.

Following Lee’s presidential victory, the president-elect faced an independent counsel investigation and was cleared of the accusations. The prosecution indicted Chung in February 2008 on charges of violating the election law by spreading false rumors against a candidate. Chung was an incumbent lawmaker at the time of the prosecution.

Although Chung was convicted in June 2008 and his appeal was rejected six months later, he continued making accusations against Lee in the podcast “Naneun Ggomsuda,” making it one of the hottest topics of the show. Often abbreviated to “Naggomsu,” which loosely translates as “I’m a petty-minded creep” in Korean, the podcast, hosted by four men including Chung, borrowed its title from a nickname they gave to Lee.

The show is highly popular among young, liberal listeners and has become a political force in recent months.

After the conviction was announced, Chung said he would make one last podcast yesterday before he would head to prison.

The conviction will bar Chung, who had registered his candidacy for the April legislative election to run from Nowon District in Seoul, from competing in the race. Under the election law, Chung will also be barred from running in an election for the next 10 years or holding a civil servant post without a special pardon.

The ruling was announced as hundreds of his fans waited outside the Supreme Court. Deploring the conviction, some shed tears while others roared their disappointment.

With teary eyes, Chung addressed fans outside the court and gave a deep bow. “Because of you, I believe the Republic of Korea is still alive,” he said.

“I feel quite calm,” he said. “I won’t be talking about the trial anymore, but everyone knows that Lee is linked to BBK. The scandal must be reinvestigated from the beginning.”

Many of Chung’s supporters also posted angry messages online. “The people think you are innocent,” one Internet user wrote. “You are already a hero.”

“It is impossible to understand the judgment because the real truth about the BBK has not been revealed yet, while various suspicions are still growing,” said Oh Jong-shik, spokesman of the Democratic Unity Party. “The Supreme Court decided to use an unfair yardstick of the law in haste against a political figure who tried to expose the truth. That is not justice.”

He said the largest opposition party will do everything it can to gain Chung’s release. Wu Wi-yeong, spokeswoman of the Unified Progressive Party, also issued a statement condemning the Supreme Court.

“Gagging Chung was the consistent wish of the Lee administration and the GNP,” she said. “Taking that into account, the conviction will never be able to escape political controversy.”

In a separate ruling, the Supreme Court yesterday upheld a conviction against an opposition lawmaker of using violence.

Representative Kang Ki-kab of the United Progressive Party was found guilty of having obstructed the operation of the National Assembly during violent protests in 2009.