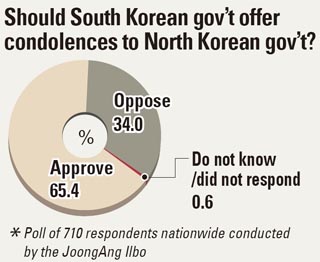 A large majority of South Koreans said the government should express condolences to the North Korean government for the death of Kim Jong-il, a nationwide survey conducted by the JoongAng Ilbo found Tuesday.

The survey results are in marked contrast to the fierce public debate that erupted in the South following Kim Il Sung’s death in 1994, when most opposed offering condolences or sending a delegation to the funeral.

At the time, the political firestorm had been ignited by a call from then-Representative Lee Bu-young to send a delegation to North Korea to express condolences for the death of the North’s founding leader. Angry members of the public attacked his office and destroyed his car.

“It’s not that I strongly insisted on sending a delegation to North Korea back then. I carefully suggested it as long as the public approved,” Lee told the JoongAng Ilbo on Wednesday.

Then-President Kim Young-sam did not offer condolences to the North in 1994, only saying at a national security meeting that he felt “regret over Kim Il Sung’s death” and that “South and North had been planning to meet in two weeks to have a frank dialogue on peace on the Korean Peninsula.”

In protest, leftist groups in the South organized a group of their own to send a condolence delegation to Pyongyang, while the North added fuel to the fire in the South by later changing its stance to allow South Koreans to pay tribute to Kim after initially prohibiting it. Similarly, the North has changed its position to allow South Koreans to travel to Pyongyang to pay their respects to Kim Jong-il. But attitudes among the South Korean public appear to have changed in the 17 years since his father’s death - calmer and less ideological.

“Looking at how people are dealing with this issue this time, it looks like South Koreans have matured,” Lee said.

Upon Kim Jong-il’s death, Representative Hong Joon-pyo of the Grand National Party suggested that the country send a delegation to the North. The Democratic Unity Party commended the ruling party, saying “it was a good decision for the [government] to offer condolences.”

Yoon Deok-min, a researcher at the Institute of Foreign Affairs and National Security, said, “South Koreans have learned from past experience that the death of North Korea’s leader doesn’t directly relate to political unrest in the South,” explaining why the South Korean public appeared to be much calmer this time around.

“Back in 1994, the degree of opposing or supporting sending condolences to the North was very strong,” Yoon added. “But now, excluding extreme leftists or rightists, most people have a more objective point of view and that is also shown in the way they think about this issue, which was once so controversial.”

He said that most South Koreans seemed to “believe offering condolences can be an opportunity to reset the tense relationship between the two Koreas.”