Robotic vacuum cleaners are becoming more prevalent in Korean homes despite their costing about 50 percent more than conventional vacuums.

According to sources in the tech industry, sales of the robotic version of the home appliance have been growing at a healthy 56 percent on average for the past three years.

Data provided by GfK Group, a market researcher, and LG Electronics, the market leader, show that some 65,000 were snapped up in 2009. This year, the figure is expected to be around 130,000.

The automated cleaners just require homeowners to switch them on before they get to work as they are able to navigate living spaces unaided, but they have also taken flak for cutting corners and not getting the job done as well as their manually powered equivalents.

One of the biggest reasons for their strong growth in Korea, however, is believed to be the increased number of double-income families, leaving couples with less time and energy to attend to domestic chores.

According to Statistics Korea, 43.6 percent of married couples in Korea are now dual-income couples. This figure rises to 52.1 percent for those in their 40s.

“I find robotic vacuum cleaners pretty useful. They’re not that good at catching all the dust, but it does a good enough job of getting rid of most of it,” said Ko Hee-jin, a 28-year-old mother. 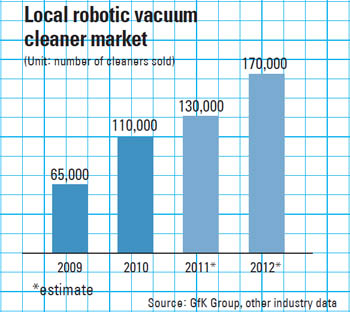 Ko bought a robotic vacuum cleaner produced by Samsung Electronics about 18 months ago while pregnant and is now on maternity leave.

Another reason for the healthy sales of robotic vacuum cleaners, market insiders say, is that over the past several years, market leaders LG Electronics and Samsung Electronics have been pumping out advanced products with high-tech functions.

In 2009, LG became the first in the industry to roll out a robotic vacuum cleaner featuring two cameras - one on either end of the vertical device. The company claimed its RoboKing Dual Eye delivers an improved cleaning performance of 30 percent.

This year, it added a third camera by releasing its RoboKing Triple Eye that it claimed enhances the machines ability to read its surroundings. It also provides a security or monitoring function as the camera links up to the owner’s smartphone.

“If you compare our robotic vacuum cleaner with those of our competitors, ours is the only one that can navigate its way around a glass of water,” said LG spokesperson Lim Yeong-min.

Samsung released a cleaner this year called Tango Stealth that can also provide a home surveillance function as it acts like a moving CCTV camera.

The company’s latest versions come with two central processing units that give them a faster response time. The devices can also be connected to a range of mobile devices.

As is often the case in Korea, Samsung and LG now find themselves vying for dominance in this field. In 2009, Samsung was the top dog before LG dethroned it last year.

LG says that its triple-eyed cleaning robot helped its market share rise to around 60 percent this spring, while Samsung’s stake hovered around 30 percent.

But Samsung officials said this gap can easily be narrowed with its advanced Tango series as it aims to reclaim the top spot.

Meanwhile, foreign players in the domestic market for cleaning robots are losing out despite enjoying early success when the market sprang up just over five years ago. Industry data shows that U.S.-based iRobot, for example, only controls several percent of the market.

“Many small and midsized [Korean and foreign] companies have lost their footing in the past few years amid fierce competition between the two conglomerates [LG and Samsung]. Now, the smaller firms are attempting to find a breakthrough with specialized products and exports,” Jo Yeong-hun, a director at the Korea Association of Robot Industry, told Korean media.