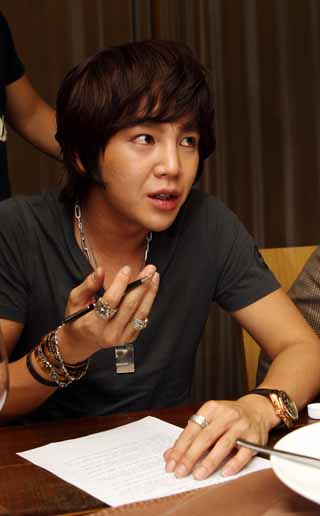 The new series continues a previous sequence that aired in September and featured the Hallyu star Jang Keun-suk.

The new commercials are titled “Writing” and “Choreography” and are based on the notion of the Korean singer penning the song in the commercial for Shufoo.

Shufoo is an online portal that provides links to some 500 major supermarket chains and regional markets in Japan for consumers to make purchases online. There are more than 68,000 retailers listed on the Web site.

Jang is a major K-pop icon who started out in acting but now also dabbles in singing. A special-edition New Year’s Day documentary will air in Korea on Jan. 1 examining the star up close. The KBS program will endeavor to explain how the entertainer rose to such prominence in Japan and other Asian nations.

Jang is currently referred to as the “Prince of Asia” by the press and fans, a title that he gladly embraced by launching his YouTube channel under the name “Prince JKS” on Dec. 13.