Lee and Hyun welcomed in North

Lee and Hyun welcomed in North

But the Ministry of Unification said yesterday evening that it has not been able to determine yet if the two delegations met with the new North Korean leader, Kim Jong-un. 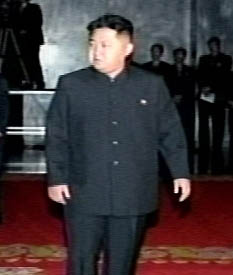 The former first lady, Lee Hee-ho, and Hyundai Group Chairwoman Hyun Jeong-eun crossed the heavily guarded inter-Korean border at about 8:30 a.m. for their ceremonial trip to Pyongyang, where the dead North Korean leader is to be interred in the Kumsusan Memorial Palace.

The two delegations, comprising 18 people in all, transferred at the border to five cars and a minibus. Accompanied by a dozen North Korean officials, they arrived in Pyongyang at about 11:30 a.m. after passing through Kaesong, one of the last remnants of high hopes during the “sunshine policy” period of a decade ago.

Lee was accompanied by four family members and eight aides, including security guards and medical staff; Hyun’s party was four aides only. No South Korean government officials or politicians were in the condolence groups, following a veto by the Ministry of Unification of such representation. North Korean authorities did allow the delegations to use communication channels with South Korean government officials during the two-day, one-night trip.

Yun Cheol-gu, the secretary general of the Kim Dae-jung Peace Center, which Lee chairs, held a quick briefing yesterday before the delegations crossed the border.

“Chairwoman Lee spoke to us about this visit in the following way,” Yun read from a statement he held. Quoting her, he said, “In August 2009 when my husband died, the North Korean leader Kim Jong-il sent a mourning delegation to Seoul, so I think it’s my duty to make a condolence visit and hope our visit will help to improve inter-Korean relations. Period.”

Asked if the delegations had been asked to convey any messages from Seoul, Yun said, “It’s just a simple condolence visit.”

According to the Unification Ministry, the visitors were invited to a two-hour-long luncheon in Pyongyang. Information was lacking, however, about which North Koreans attended the lunch or where it was held.

After the luncheon, they were scheduled to pay their condolences at Kim Jong-il’s glass coffin in the Kumsusan Palace. The next scheduled event on the first day had not been decided before the delegations left Seoul. North Korea told the South’s authorities that the delegates would stay at the Paekhwawon State Guest House.

Today, Lee will visit the Kaesong Industrial Complex in the morning, but Hyun will directly come back to the South and arrive at the border at about 12:20 p.m. Lee will follow with her delegation later in the afternoon.

The 89-year-old former first lady has visited North Korea three times, and this was her second land crossing into the South’s reclusive neighbor. In June 2000, when the first inter-Korean summit was held, she traveled by private jet with her husband to Sunan International Airport in Pyongyang. In August 2007, she was invited by the North for a sightseeing trip to Mount Kumgang by land.

The Hyundai chairwoman, 56, was in the North in August 2009, when she met with Kim Jong-il to resume the stalled Mount Kumgang tourist project.