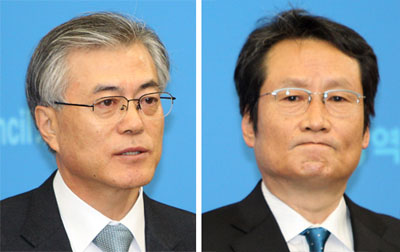 Three prominent members of the loyalist group of the late President Roh Moo-hyun declared their intention to run in the April legislative elections in Busan, a traditional stronghold of the Grand National Party, signaling the start of the Democratic Unity Party’s campaign against the conservative ruling party.

Moon Jae-in, head of the Roh Moo-hyun Foundation and the former president’s last Blue House chief of staff; Moon Sung-keun, an actor-turned-activist; and Kim Jeong-gil, a home affairs minister in the Roh administration, held press conferences to declare that they want to represent districts in Busan.

The trio will run on the DUP ticket: Moon Jae-in said he wants to represent the Sasang District, an industrial area, while Moon Sung-keun said he will file his candidacy to represent the legislative area comprising the Buk and Gangseo B Districts. Kim declared his candidacy for Busan’s Jin B District. Their choice of districts is a strategic one, because of the long-time hold the GNP has shown in them. The announcements made the three politicians icons of the newly created liberal party’s strategy to face the conservative ruling party in its strongholds.

“Busan and South Gyeongsang will decide the ultimate outcome of the next year’s legislative elections,” Moon Jae-in said at his press conference. “When the places change, we can bring about a change in the Republic of Korea.”

He also said Busan would only be able to develop “normally” after it escapes the 20-year dominance of a single party.

Busan and South Gyeongsang have long been the national strongholds of the GNP. In the 2008 legislative elections, the Grand Nationals won 11 out of 18 seats in Busan and 13 out of 17 seats in South Gyeongsang.

Moon Sung-keun said he decided to jump into the race to arm the Democratic Unity Party with nationwide influence. His decision to run for the Buk and Gangseo B seat appeared to flow from the area’s history with Roh. In 2000, Roh ran for the same seat but was narrowly defeated.

“The two Moons’ decisions gave courage and hope to our efforts to end regionalism,” Kim said. “I will create a gust of wind in Busan to lead the liberals’ victory in the elections. I believe we can win more than 15 seats in Busan and South Gyeongsang.”

In other areas of South Gyeongsang, other key Roh loyalists also declared their bids. Kim Gyeong-su, a former secretary to Roh, will run in the Gimhae B District, where Roh’s hometown of Bongha Village is located.

Song In-bae, a former Roh Blue House aide, will run in Yangsan and Kim Sung-jin, a Roh Blue House colleague, has declared his bid in the Masan A District.

Other former members of the Roh administration are also running in key districts of Busan; they are Jeon Jae-su and Kim In-hoe.

The Democratic Unity Party said its ambition is to win more than 10 seats in Busan and South Gyeongsang to prove itself a national political party. “The two Moons’ bids in Busan will serve as an opportunity for us to overcome the perennial regionalism,” said the DUP’s spokesman, Oh Jong-sik. “We strongly believe that Busan and South Gyeongsang will be the ground zero of our victory.”

Although the GNP has long enjoyed the electorate’s favor in Busan and South Gyeongsang, the DUP’s strategy to field well-known candidates in those areas could accelerate the threat in the conservative party’s strength, which has shown some signs of eroding recently. In the June 2010 local elections, Kim Du-kwan, a former home affairs minister in the Roh administration known as “Little Roh Moo-hyun,” won the South Gyeongsang governorship as an independent candidate. He said recently that he would soon join the Democratic Unity Party to support the liberals.

Kim Jeong-gil, who has declared his bid to become a lawmaker in Busan, also has built a strong backing. In the last local elections, he ran for mayor of Busan, drawing 44.6 percent of the votes in an unsuccessful campaign.

The Grand Nationals are planning a counteroffensive, however. Several prominent GNP politicians have lined up to try to thwart the liberal party’s bid for power.

Kwon Chul-hyeon, a former ambassador to Japan; and Kim Dai-sik, former vice chairman of the Anti-Corruption and Civil Rights Commission, have already declared their ambition to run in the Sasang District of Busan, where Moon Jae-in will run. That seat is now held by Representative Chang Je-won of the GNP, who said he will retire.