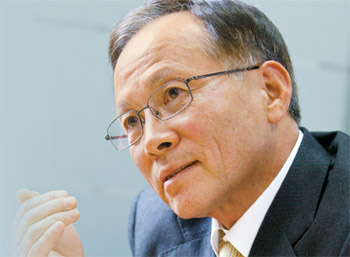 Even after the power transition to Kim Jong-un, North Korea won’t give up its nuclear weapons no matter how much food assistance it receives, said Lee Soo-hyuck, former South Korean delegate to the six-party talks.

The 63-year-old, high-profile former diplomat is one of a few South Korean officials who have been engaged in multinational talks for North Korea’s nuclear disarmament. In 1997, when he was consul general at the South Korean Embassy in the United States, he succeeded in arranging the first so-called four-party talks in Geneva, a historical dialogue among the two Koreas, China and the United States, the first since the armistice that ended the war in 1953.

In August 2003, he was anointed as the nation’s first senior delegate for the six-party talks, and served in the post until April 2005. In November 2006, he was promoted to the first deputy director of the National Intelligence Service, the No. 2 post covering international affairs in South Korea’s spy agency.

Even after Lee retired in March 2008, he remained prominent because of his latest book, “Realism on North Korea,” which makes straightforward theses such as: “North Korea won’t collapse,” “North Korea won’t give up its nuclear power” and “China won’t leave the North.”

In interviews with the Korea JoongAng
Daily, the JoongAng Ilbo and JMnet’s Economist, Lee said he believes that possession of nuclear weapons is a matter of national security and survival for North Korea, not a bargaining chip to be traded for food assistance or other benefits. He said even after North Korea settles behind its new leader, the country won’t disarm its nuclear weapons.


Q. Under the unprecedented third generation of succession, do you think North Korea will give up its nuclear arms?

A. For North Korea, keeping nuclear power is not decided by the emergence of an individual leader, like Kim Jong-il, but by interests for national survival. I think North Korea wants nuclear power, given the Korean Peninsula’s critical geographic security issues, not because of a single leader’s characteristics.

Some say that North Korea will give up its weapons if given food assistance. But it’s not that easy. Under so many difficulties, such as UN sanctions, North Korea has kept its nuclear power. For them, it’s not negotiable.

If North Korea has no intention to quit its nuclear weapons program, then have the six-party talks become useless?

North Korea has had no intention of nuclear disarmament since the beginning [of the talks]. However, we have to keep the format in place. If they are dissolved, it becomes so hard to reorganize them. The resumption of talks won’t be decided quickly. But we need to solve the nuclear weapons issue through the six-party talks.

What do you think is the worst scenario after the emergence of the new leadership in the North?

Except for an outbreak of war, the worst is if China stations its troops inside a collapsing North Korea. In case of a national emergency, North Korean people would flock to China, then the Chinese government could intervene in North Korea’s domestic affairs in the name of protecting its own national security.

If the Chinese military is stationed in the North for a long time, the 65-year history of separation between the two Koreas could become permanent, sparking a new cold war between China and the United States.

Were you also shocked that the Blue House and the NIS were not aware of the death of Kim Jong-il for 50 hours?

I was surprised by the dearth of information on North Korea [in the South]. Three other countries - the United States, Japan and China - would have also been shocked by it. The main thing is that North Korean authorities would have felt pretty relieved because the outside world’s ignorance of its internal affairs verified that no one could penetrate its inner circle.

It’s hard to say there was. North Korea’s ruling class was rich and Kim Jong-il treated them hospitably so that they wouldn’t provoke a revolt against him.

What if we reacted differently to North Korea’s nuclear tests? Do you think North Korea would change?

In retrospect, I think the Roh Moo-hyun administration didn’t go through painful reflections about the past. The administration should have pondered deeply what results our measures against the North would bring and then reacted to the North, but I’m not sure whether the officials in charge of North Korean affairs in the administration imagined the consequences [from the possible result].Our government [President Lee Myung-bak] has taken temporary and domestic measures and put its efforts into imposing UN sanctions on North Korea, which didn’t help prevent the second nuclear test. The Lee government should have replaced the senior delegate for the six-party talks and then taken more decisive action.

The idea that “If we retaliate against the North, it would trigger a war” is a trap for us. In previous emergencies, our leaders should have shown a firm response, but they didn’t, which North Korea sees as weakness.

When you served as the first deputy director at the NIS, didn’t you take the job related to North Korea’s nuclear weapons program?

At the time, the situation was complicated, such as freezing North Korean assets in Banco Delta Asia or the outbreak of the Afghanistan War. Honestly, I felt uncomfortable with U.S. intervention in the Banco Delta case, because I don’t think the matter of shutting down a North Korean bank account would lead to its denuclearization.

When I was the six-party talks delegate, the United States attempted to bring up issues of drug addiction or fake currencies in North Korea, but I resisted the move, because North Korea wouldn’t show up at the negotiation table [if those matters were to be discussed].

At the time, the United States was ailing because of quarrels between neo-cons and moderates. When the United States was trying to shut down the light-water reactor out of suspicion that it could be related to the development of nuclear weapons, South Korea resisted, because we had already invested $1.7 billion in the reactor.

James Kelly, former assistant U.S. secretary of state for East Asian and Pacific affairs who was a moderate, told me that he would negotiate with the [South Korean] government, but John Bolton, then-undersecretary of state for arms control and international security and a neo-con, declared that “there’s no future for the North Korean reactor.”

In your book, why did you say that China wouldn’t be helpful at all in resolving North Korean issues?

China has a limit to its control over North Korea. During the six-party talks, then-Chinese delegate Wang Yi and I visited the North Korean counterpart Kim Gye-gwan. However, he didn’t open the door of his room and ordered his aide to tell us he “refuses the visit.” The response seemed to come out of fear that China would bond with South Korea to demand the North’s denuclearization.

How do you think North Korea will give up its nuclear weapons?

As I mentioned in my book, there should be preconditions to make the North give up the weapons. However, it’s very difficult to technically verify whether North Korea has indeed abandoned the nuclear weapons. We should offer collateral in good trust to reassure North Korea that we won’t demolish its national security.

By providing economic assistance, we can’t obtain the goal.