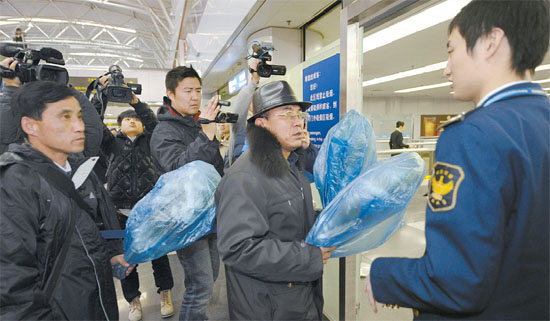 
DANDONG, China - Almost all North Koreans working or living overseas quickly returned home by early yesterday to follow the regime’s order to take part in the funeral service for their “dear leader,” according to sources with knowledge of the North yesterday.

The order said to return to the North by 8 a.m. Tuesday, and the country is known to have started official preparations for the funeral of Kim Jong-il after that time. The service is slated for today.

A North Korean cargo ship operating here hurriedly finished its business at around 9 p.m. Monday and returned to the North Korean port of Nampo, South Pyongan Province, a source confirmed to the JoongAng Ilbo.

Only a few employees at North Korean business organizations in Dandong, a source of foreign currency for the regime, remained in the city as of yesterday. Many key employees of the organizations who went to Pyongyang right after the North’s announcement of the death of Kim Jong-il on Dec. 19 are yet to return.

The North’s beefed-up preparation for Kim’s funeral was also confirmed by the surge in funeral items coming from China, particularly flowers.

After Kim’s death was made official, the number of Chinese trucks passing through customs at China-North Korea borders daily dropped from 250 to around 120. But, yesterday it was about 200.

The North was known to have imported expensive condolence flowers from Kunming, Yunnan Province, China, to adorn the funeral. “Three trucks leaving for Pyongyang yesterday afternoon were full of flowers,” said a source in Dandong yesterday. “I haven’t seen that many flowers entering North Korea at one time before.”

The sources said each truck is about 80 cubic meters (2,800 cubic feet). The biggest shipping containers are 64 cubic meters. The sources said those flowers were brought from Kunming and airlifted from Shanghai to Dandong. With additional shipping cost added, one flower was priced at 10 yuan ($1.58), five times the usual price for flowers in the region.

The demand for flowers from the North was so much so that natural flowers were not available any more in Dandong, the sources said. Still, the North eagerly sought more.

North Koreans usually impose a 400 yuan penalty on entering Chinese cargo trucks if they leave later than the deadline of 4 p.m.

“North Korean officials were saying recently that they would exempt the penalty for such a violation if the Chinese bring white, natural flowers,” a source said.