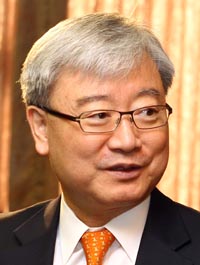 Chairman of the Financial Services Commission Kim Seok-dong vowed to “revolutionize” the financing structure of small and mid-sized enterprises while defending the stability of the financial market “by any means necessary” in 2012.

“The economic situation will become more difficult than you imagine,” Kim said at a media seminar late Tuesday night. “And for the FSC, financial market stability is a premise that cannot be ceded. We will even issue measures that might appear excessive at times [to keep market stability].”

The head of the FSC again underscored his intent to make financing more accessible for SMEs in 2012. “If market stability is our defensive tactic, our offense is [policies for] start-ups and SMEs,” Kim said.

“We will do away with joint liability on loans, and if an employee [of a financial company] is reprimanded for problems arising from loans provided on personal credit, the CEO of said company will be held responsible.”

Kim also defended the FSC’s decision to hasten the pursuit of high-profile projects such as normalizing the savings bank sector and addressing the rise of household debt since January, saying that the FSC followed “a script” that foresaw economic contraction in the latter half partly due to “a breakdown of the euro system” from an inherent structural problem” of no fiscal integration.