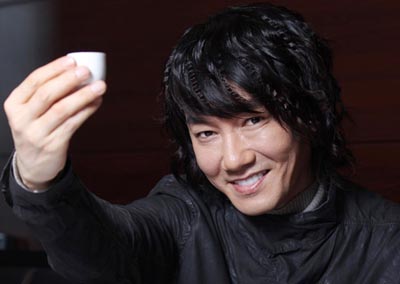 Singer Kim Jang-hoon who has previously been in the news for launching a smartphone application for the Dokdo islets movement has taken on another project. This time, instead of raising awareness for Korea’s territorial claim, the entertainer is striving to help the plight of “comfort women.”
Comfort women is a term used to describe Korean women who were forced into sexual slavery during World War II by the Japanese military.

The celebrity joined forces with visiting professor Seo Kyoung-duk from Sungshin Women’s University to take out a one-page advertisement in the Asian edition of The Wall Street Journal. The scholar announced the collaboration using his Me2day Web site. “Kim Jang-hoon and Seo Kyoung-duk, we are at it again. We’ve managed to take a full page ad in The Wall Street Journal. Please use your own Me2Day Web site for publicize this ad.”

The one-page ad captures the shot of the comfort women at their 1,000th protest rally held outside the Japanese embassy in Seoul on Dec. 14.
Words “Do You Hear?” is set out as the headline as the ad divulges details about the injustice the women have suffered over the years as the Japanese government has yet to make an official apology.

Kim is said to have paid for all the expenses that went into placing the advertisement. When asked why he took part in funding the project, the singer said, “People think that this issue surrounding comfort women is only a Korea-Japan issue. However it’s also an issue to do with human rights as well as equal rights for women.” Kim and Seo have previously collaborated on a documentary to do with the land dispute over the Dokdo islets.