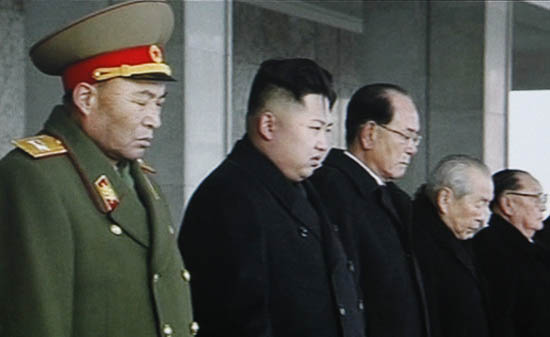 North Korea’s new leader Kim Jong-un, second from left, next to Ri Yong-ho, the chief of general staff of North Korea’s army, left, during the memorial yesterday for his father Kim Jong-il in Pyongyang. [REUTERS/YONHAP]


Around 100,000 North Koreans hailed Kim Jong-un as their new leader yesterday on the final day of the funeral for his father, former leader Kim Jong-il.

It was only the second day on which average North Koreans got to see their new leader in the flesh, following the first day of the funeral Wednesday, in which he walked alongside the hearse carrying his father’s casket. Kim Jong-un, the youngest son of Kim Jong-il, appeared on a balcony of the Pyongyang Hana Music Information Center, the site of the final “field guidance trip” of his father, at the front of Kim Il Sung Square. Approximately 100,000 people were gathered to see him.

Kim, along with top military and party officials, stood for an hour-long memorial with brass bands and speeches.

Kim Jong-un, who is in his late 20s, had been seen in public at party meetings and accompanying his father on field guidance trips, but never at an event open to the public. He was dressed in a dark coat and wore a serious expression.

Following a performance by military bands, a series of Workers’ Party and military officials delivered commemoration speeches, led by the chairman of North Korea’s Supreme People’s Assembly Choe Tae-bok, who acted as master of ceremonies.

Three high-profile officials followed, including Kim Ki-nam, a secretary of the Central Committee of the Workers’ Party and Kim Jong-gak, senior deputy director of the General Political Bureau of the Ministry of People’s Armed Forces.

Analysts said that the four men who delivered speeches yesterday at the mass meeting were among the seven officials who accompanied the hearse with Kim Jong-un the previous day, and they are a part, if not the core, of the inner circle surrounding the young leader.

After the meeting, soldiers fired rifles and attendees bowed their heads for a minutes-long silent commemoration. Trains and ships in ports reportedly blasted their horns at that time.