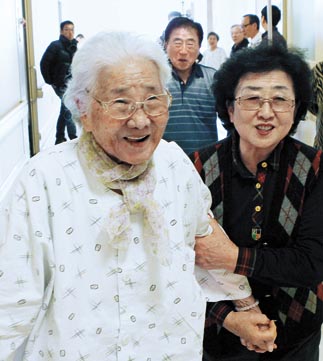 Jeju-native Moon Gwi-shun (left), received colorectal cancer surgery at the age of 102. She walks the hallways in Seoul St. Mary’s Hospital with her daughter, Go Sun-suk, 78, and son, Go Gwang-min, 77. By Kim Hyung-soo

A 102-year-old woman has become the first centenarian to survive surgery for colorectal cancer. She was up and about in the hospital on Christmas Day, 10 days after the operation.

Moon Gwi-chun, born in 1909, is the oldest person in the world to undergo successful cancer surgery, beating out the record set by a 99-year-old British woman who underwent breast cancer surgery in Great Britain in September of this year.

It is likely that Moon will be recorded in the Guinness Book of Records as the oldest person to have cancer surgery.

“It’s just cancer surgery,” said Moon, walking down the 16th floor of Seoul St. Mary’s Hospital on Sunday. “I am this old, what should I be afraid of?”

She was to be released from the hospital the following day.

When asked by a reporter, “Aren’t you scared of surgeries?” Moon held up her clenched fists to show her resilience.

“My mother is a person without fear,” said her 78-year-old eldest daughter, Go Sun-suk.

Moon’s pronunciation was accurate and her eyes were piercing.

A resident of Sam-dong, Jeju, Moon came to Seoul early this month. Her husband passed away 18 years ago, and she has been living with her daughter since.

But two months ago, Moon started feeling bloated in the stomach and developed frequent diarrhea. This prompted her to seek help at a large hospital.

Moon usually suffered diarrhea once or twice a year, but she rarely got sick.

Examinations showed two cancerous growths, an S-shaped lump on her colon and another in the rectal region.

It was Stage 2 colorectal cancer.

Moon consulted with her son and four daughters and, at the end of the discussion, decided to have surgery.

Dr. Kim Jun-ki, who performed the operation, said: “Normally, elderly people who pass 80 think ‘I have lived as much as I want to live. I don’t want to put a burden on my children so I’ll forego surgery.’ But this person was different.”

Not only was her determination to receive surgery strong, but “The support of her family was strong and her physical condition was good, so a surgery was decided upon,” the doctor said.

On Dec. 15, Dr. Kim and his team performed laparoscopic surgery on Moon, puncturing five holes in her stomach and cutting away 33 centimeters (13 inches) of her colon. She endured a six-hour operation under complete anesthesia.

Moon started walking four days later and has recovered so rapidly that she is now able to walk around on her own.

Dr. Kim said: “She is as fit as someone in her 80’s, so recovery was quick. It is quite possible for her to live another five or 10 years.”

Cancer patients who survive beyond that period of time are considered to have fully recovered.

Moon’s great physical condition is due in part to a healthy diet and belligerent personality.

She does not shy away from any food and also grows her own vegetables in her garden.

Because she likes to garden, she grew barley and beans into her 60s. Even these days, she tends to her plants and grows some 20 orchids in pots in her house.

“I’m going to live having fun,” Moon said. “I like living, talking with people.”