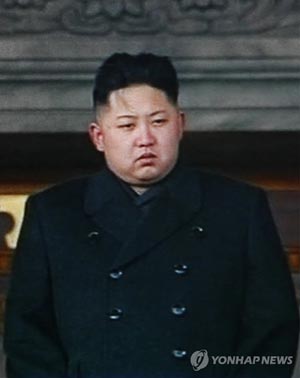 As the world strains to spot any signs of change in post-Kim Jong-il North Korea, its top decision-making body issued a bellicose statement yesterday saying it will not change a thing in its position against the South and the outside world.

“We solemnly declare with confidence that foolish politicians around the world, including the South Korean puppet group, should not expect any change from us,” the National Defense Commission said in the statement. “As we already declared before, we won’t deal with the traitorous Lee Myung-bak government forever.”

“As soon as we released our emergency announcement, the South Korean puppet group convened security meetings and beefed up prohibitions on overseas delegations, as if it had longed for an emergency [in North Korea] for a long time.

“And the Lee Myung-bak puppet group stood at the vanguard of the evil misdeeds,” it continued. “The traitor group committed a grave national crime by prohibiting private delegations in the name of preventing national turbulence and blocking all routes of South Koreans longing to come to our father of the people.

“Our sea of bloody tears of our people will become a sea of fire to burn out the traitor group till the end,” it said.

“It’s true that we’re disappointed with the NDC’s statement,” Choi Boh-seon, the spokesman of the ministry told reporters. “But the South Korean government’s position on inter-Korean relations remains unchanged: easing tensions and resolving the frosty relations through dialogue.”

According to the ministry, it’s the first time that the NDC issued a statement in the name of the entire commission. So far, it has issued four statements under the name of a spokesperson.

Yun Duk-min, a professor at the state-run Institute of Foreign Affairs and National Security, said that North Korea is trying to consolidate its internal command structure by getting tough on the South, as it did when founder Kim Il Sung died in 1994.

“When Kim Il Sung died, North Korea worsened inter-Korean relations by lashing out at the South’s ban on private mourning delegations in order to establish its ‘military first’ policy,” Yun said. “In the midst of various problems such as the failure of its currency reform, North Korea has to do something to solidify its internal control structure by creating an outside crisis.

“However, U.S.-North Korea relations will possibly improve, just like in 1994, when they made the Geneva Agreed Framework [on the North’s nuclear weapons program,]” Yun added.

“As the leader has changed, North Korea needs to show its official position once again,” Ko Yu-hwan, a professor at Dongguk University, told the Korea JoongAng Daily.