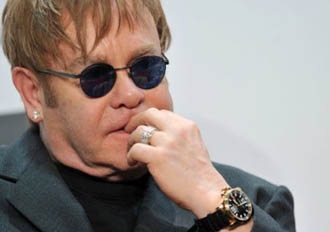 LOS ANGELES - Elton John is working on a biopic about himself and would like Justin Timberlake to take on the lead role, he said in an interview published Sunday.

The British veteran star also spoke about his and partner David Furnish’s love for their son Zachary - whose first birthday was on Christmas Day - saying the child was the “light of our lives.”

An announcement about the biopic is due very soon, the 64-year-old told the Los Angeles Times newspaper.

“That’s very much in the works. We’re making an announcement about that very, very soon. We have a director on board, and then it’s just going to be a matter of getting the script exactly the way we want it,” he said.

Lee Hall, who wrote megahit “Billy Elliot,” has written the screenplay, he said, adding they will soon start trying to cast and plan production.

On who will play him, he said: “I don’t know. I’ve got a wish list of people. No. 1 on my wish list is Justin Timberlake because he played me before in a David LaChapelle video of [Elton classic] ‘Rocket Man’ and was superb.”

The film will be a “jukebox musical” with possibly a couple of new songs, he said. “It’s going to be a surreal look at my life, and not just a factual look at my life. .?.?. I just don’t want it to be a normal biopic because my life hasn’t been like that,” he added.

The singer - who is to be nominated for a Golden Globe on Jan. 15 for his song “Hello, Hello” from the film “Gnomeo & Juliet,” will be back in the studio soon to record a new album - but insisted his days as a top-40 pop star are over.

“As Elton John, my days on pop radio are over, and I know that and I accept it and I’m not unhappy about it. It’s a different time of my life now, and it gives me the freedom to do whatever kind of music I want to do.”