A pair of former spy bosses lurk in the shadows

A pair of former spy bosses lurk in the shadows 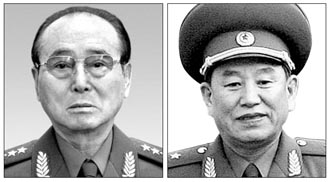 When Kim Jong-un paid tribute to his father’s glass coffin at the Kumsusan Memorial Palace on Dec. 23 with top party and military officials in tow, the activities of 80-year-old military general O Kuk-ryol, a former spy agency director for North Korea, caught the eye of South Korean analysts.

O, a vice chairman of the National Defense Commission, was the 11th person to pay tribute to the late leader Kim Jong-il on that day. The order of commemoration is telling, South Korean analysts say, as it indicates how high the person ranks in North Korea’s ruling echelons. 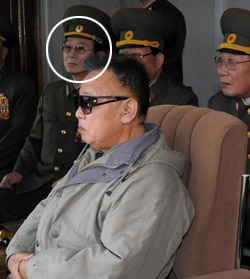 Given that O was only the 29th person on the national funeral committee’s list, O’s status escalated rapidly in the following four days. Released on Dec. 19, the list functions as an informal map of the next inner circle of the Kim Jong-un regime.

O was the fourth military official to pay respects on that day, following top military brass Ri Yong-ho, chief of the general staff of the army, Kim Yong-chun, minister of the People’s Armed Forces, and Ri Yong-mu, a vice chairman of the National Defense Commission.

The four-star general’s family has ties with North Korean founder Kim Il Sung. His father, O Jung-song, was a close confidant of the founder, serving as a communist guerrilla against Japan. His uncle, O Jung-hup, is recognized as a role model for North Korea’s army. In short, O is regarded as a “noble” in North Korean politics.

Sources say that O was a close friend of late leader Kim Jong-il and also a drinking companion.

A North Korean defector who had observed O beside him told the JoongAng Ilbo on the condition of anonymity, “O is smart. He has a great sense of organizing and pushing things forward, earning him absolute trust from Kim Jong-il.”

However, in the 1970s, O was on the brink of being exiled to the countryside due to a conflict with then-minister of the People’s Armed Forces, O Jin-u. But Kim Jong-il saved him, appointing him to a newly created spy bureau against South Korea, called “Operation Department.”

“Kim Jong-il protected O from being marginalized,” the defector said.

O served as head of the secret espionage department for more than 20 years, organizing an elite troop and building a naval ship factory. The department wasn’t actually under the control of the chief of the general staff of the army, but under Kim Jong-il’s direct control.

O’s two strengths - he has many years of experience as a military official and as a guerrilla’s son he is considered one with the “bloodline of revolution” - will make him an influential supporter for the untested Kim Jong-un’s regime, experts say.

Then a new spy director emerged. Kim Yong-chul was appointed to the expanded bureau, which was formally under the North Korean military but actually controlled by Kim Jong-il himself.

The South Korean government suspected that the bureau was behind the sinking of the naval ship Cheonan in March 2010.

In fact, North Korea’s official Rodong Sinmun publicized the picture of Kim Jong-il encouraging officials at the bureau in April 2010, while the South’s government officials scrambled to figure out the cause of the sinking.

Kim Yong-chul is also known as a hawk. During the 2007 inter-Korean military talks, he was the counterpart of Jung Seung-jo, who is currently the deputy commander of the South Korea-U.S. Combined Forces Command.

A South Korean government official told the JoongAng Ilbo that “A source says that Kim Yong-chul once was a tutor of Kim Jong-un when the heir was attending Kim Il Sung War College.”

In brief, analysts expect that O and Kim Yong-chul will play a pivotal role to support Kim Jong-un, with their experience in the spy agencies of North Korea.