Poll on next president hinges upon economy

Poll on next president hinges upon economy 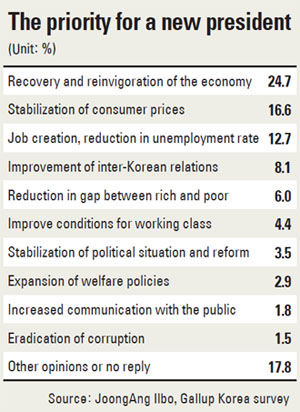 The economy is still deemed a crucial factor in who will be the next Korean president, a recent JoongAng Ilbo-Gallup Korea survey showed.

The issue of the economy had the biggest influence on the previous presidential election in 2007.

Former Hyundai Engineering and Construction CEO Lee Myung-bak won the election in a landslide victory upon his “747” pledge, in which Lee promised the country 7 percent GDP growth, $40,000 per capita income and to become the seventh-largest economy.

In the survey, conducted on Dec. 28, 2011, about a year ahead of the next presidential election, people were asked what should be the most urgent priority for a new president, and 54.0 percent of the respondents cited economy-related issues.

Specifically, 24.7 percent of the respondents picked recovery and reinvigoration of the economy, 16.6 percent the stabilization of consumer prices and 12.7 percent job creation or reduction in the unemployment rate.

The figure for economic issues gets higher if it includes 6 percent of the respondents who said a reduction in the gap between the rich and poor is the biggest priority, as well as 4.4 percent who said improving the conditions for the working class and 2.9 percent who said expansion of welfare policies.

The most cited noneconomic priority was improvement of inter-Korean relations, which was suggested only by 8.1 percent of the respondents.

A total of 1,014 adults across the country, a sample group selected proportionately to all Korean constituents in terms of gender, age and regional population, responded to the telephone survey.

The poll had a margin of error of plus or minus 3.1 percentage points.

The survey asked who among those currently considered presidential candidates is equipped with the best ability for economic development, and 23.2 percent of the respondents picked Representative Park Geun-hye, the interim leader of the ruling Grand National Party.

Ahn Cheol-soo, a software mogul considered to be Park’s main contender, drew 19.5 percent of the response.

The survey also asked what is the most crucial criterion for selecting the new president.

Among many different criteria it included: the ability to govern the state, ethics and ideological tendencies, and 29.0 percent of the respondents picked ethics.

That is more than double the 12.7 percent who picked ethics in the previous survey conducted by Gallup Korea in December 2006, a year before the 2007 elections.