Choi, Hong pledge to work for good of Korea

Choi, Hong pledge to work for good of Korea 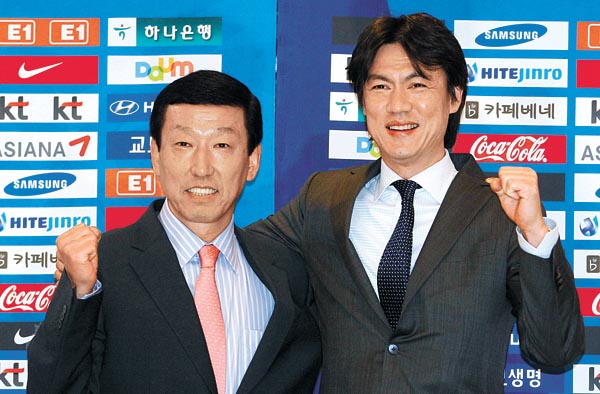 
The football coaches of the senior national team and the Olympic team both said yesterday they will help each other closely to produce results and get more support from fans this year, refuting speculation that both might have conflicts in their player-selection process.

In a joint press conference held at the Plaza Hotel in central Seoul, Choi Kang-hee, coach of the national team, and Hong Myung-bo, coach of the under-23 team, said that they will work closely if there is an issue that affects both teams.

“The year 2012 is a very important year for Korean football,” Choi said. “To achieve a good result for the national team and Olympic team, I will collaborate closely with Hong.”

Choi, who took the helm after Cho Kwang-rae was fired in early December, and Hong emphasized there will be no friction in player selection. Last year, when Cho was in charge, the two national teams fought over the selection of young players, and the technical committee of the Korea Football Association (KFA) had to step in to solve the issue.

“If the senior team needs players from our team, then they will go join that team,” Hong said. “I’ve talked about this with coach Choi, and I don’t see any major problem.”

The senior team hosts Kuwait in its third and final round of the Asian qualifiers for the 2014 FIFA World Cup on Feb. 29. Korea leads Group B. But if Korea loses to Kuwait, and if Lebanon, which has the same points as Korea but is behind in goal difference, beats or draws against the United Arab Emirates, Korea loses its chances for an eighth consecutive World Cup.

Choi, 52, said he is only thinking about the match against Kuwait next month and will form the squad with experienced veteran players to get a victory in the crucial qualifier.

“The Feb. 29 game is the most urgent task at this moment,” Choi said. “My job is to recruit the country’s best players and play the best game on that day.”

Choi said about 30 players are on his mind at the moment, but the details of the squad will be finalized after he forms a coaching staff this week. While refuting the idea of recalling Park Ji-sung to the national team, the former Jeonbuk Hyundai Motors coach said the player selection is difficult and players need more time to show how they fit with the team.

“If it’s during the season, we need about three or four days of training, but now, I think we need about 10 days to get our players in shape,” Choi said.

The two-time K-League Coach of the Year emphasized that the important thing is to build a good atmosphere for the Kuwait match.

“I don’t think Korea football is standing on the edge of a cliff,” Choi said. “If we can just turn things around, I believe we can still be a great team.”

While Choi said he will think positively, Hong warned about people being too optimistic of his squad as there are three matches left to determine their passage to the London Olympics this year.

In the Olympic qualifications, Korea sits in the driver seat in Group A, leading three points ahead of Oman. But next month, the young Taeguk Warriors will hit the road for Saudi Arabia and Oman before hosting Qatar on March. Only the group winner can advance to the Summer Games.

“It’d be great if we win the next two games on the road and qualify, but we’re all thinking the berth will come down to the final match,” Hong said. “Too much optimism could affect our young players’ form.

“We are not done yet. The difficult part is just starting.”