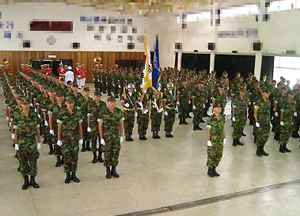 The government will ease physical qualifications for mandatory military service, allowing a range of people to serve who had been turned away before, including extra-tall and sterile men.

The Ministry of National Defense said in a statement released yesterday it will revise an ordinance on physical qualifications for conscription in order to “rationalize the standard of disease and raise fairness of physical qualification.” The new rules will take effect at this year’s first inspection on Feb. 8, the ministry said.

“Previously, the government had strict physical criteria in selecting healthy men, excluding those with heart disease or poor eyesight,” Kim Tae-bong, an official at the Ministry of National Defense told the Korea JoongAng Daily. “However, as medical skills develop, people with some diseases can now be easily cured.”

Although specific changes weren’t announced, the ministry gave a series of examples that are likely to be included in the new qualifications.

The height limit will be raised from 194 centimeters (6.37 feet) to 204 centimeters. Sterile men and those with disorders related to sex such as erectile dysfunction will also be qualified.

Previously, those two groups weren’t allowed to actively serve in the military and were given alternate duties, such as desk jobs in government offices.

Those who had gastric procedures to lose weight will be also conscripted. Previously, a man was exempted from service if he had more than two-thirds of his stomach removed, or given alternate duties if half of his stomach had been removed.