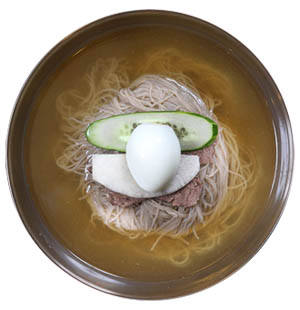 Soba is perhaps the most recognizable cold noodle dish from Asia for Westerners, but for Koreans, naengmyeon, or cold buckwheat noodles, is still the reigning cold noodle delicacy.

There are many variations on the dish, but Pyongyang naengmyeon, originating from North Korea, is considered the “real deal,” with a dark-yet-clear meat broth and noodles with high buckwheat content.

When the dish first started becoming popular in North Korea, the broth was often made with pheasant or chicken, as these meats were more readily available than beef or pork. In less affluent households, the broth was made with dongchimi, or pickled radish soup, and water. After the Korean War, the dish became popular in the South as well, with Pyongyang naengmyeon restaurants opening one by one in northern Seoul.

At the traditional Pyongyang naengmyeon restaurants in Seoul, including Euljimyeonok, Woolaeoak and Pyongyangmyeonok, among others, the broth is now made with either beef or pork or a mixture of both. The dish is garnished with slices of meat, cucumbers, pears and half of a boiled egg. Vinegar and mustard are also offered to mix in with the broth, and the dish is served with a warm cup of myeonsu, which is the water left over after the buckwheat noodles are boiled.

Another dish frequently served at these restaurants is pyeonyuk, or boiled pork or beef slices used to make the broth. This dish is often offered as part of a set that also includes a bowl of naengmyeon and a half bottle of soju).

Unlike other naengmyeon varieties, Pyongyang naengmyeon is very mild in flavor and the noodles are not chewy, as the high buckwheat content makes them soft. Other forms of the dish use noodles made either from potato starch or arrowroot.

The dish’s mild flavor is due mostly to its origin in Pyongyang, where most dishes use minimal spices and sauces. Fans of the dish say that its mild, almost bland, flavor becomes addictive over time.