Law would give smokers more info

Law would give smokers more info 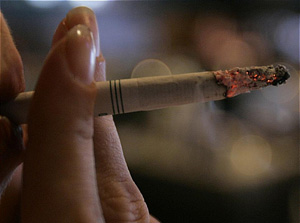 The government is considering a law that would require tobacco companies to tell people what is really in the cigarettes they’re smoking, whether or not they actually want to know.

Under the new law, tobacco manufacturers would be required to reveal all the ingredients and harmful additives in their cigarettes on their Web pages.

The current law only requires indicating the main ingredients such as nicotine and tar on packaging.

In addition, the Ministry of Health and Welfare said it is also looking into adding a warning picture and text on cigarette packs to “make it look like the cigarette packaging in other countries, such as the U.S. and Europe.”

The ministry said yesterday that it is looking into enacting a law detailing comprehensive regulations, including manufacturing, advertising, selling and pricing of cigarettes, within the year. However, it explained that the law would not be implemented until about a year later.

Currently, cigarettes are regulated under separate laws, including the Tobacco Business Act and the Health Promotion Law.

In order to manage the tobacco regulations more efficiently, the ministry said the new law will be a combination of these regulations.

The ministry is also considering allocating the authority to monitor safety issues concerning cigarettes to the Korea Food and Drug Administration.

“We expect the new law on tobacco to have a positive effect, as we believe some people will make different choices about whether to smoke or not after they realize what kinds of ingredients and additives are included, as well as the details of what harm the ingredients can do to their health,” said an official from the Health Ministry.