Global woes may limit growth to 3 percent in 2012

Global woes may limit growth to 3 percent in 2012 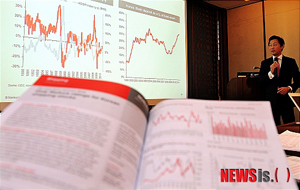 The domestic economy is expected to quickly lose steam this year as the debt turmoil in the euro zone looks set to deepen the global economic slump, Nomura said yesterday.

The global investment bank predicted Asia’s fourth-largest economy will expand 3 percent in 2012, a drastic downgrade from its prediction of 5 percent at the end of 2010. The government is more optimistic, setting 3.7 percent growth as its target.

“With global economic growth expected to slow to 3.2 percent from 3.7 percent, Korea will inevitably move in this direction,” Kwon Young-sun, a senior economist at Nomura International, told reporters in Seoul.

The impact from the European sovereign debt crisis and China’s weaker growth will likely make a dent in Korea’s exports and domestic demand, he said.

“Inventories [for Korean firms] have increased and shipments fallen, which means their production will also decline,” Kwon said.

To buttress the economy, Nomura said there is a high chance the government will draw a supplementary budget of around 15 trillion won ($10.3 billion), or 1 percent of the country’s gross domestic product, during the second quarter of the year.

“Our forecast for 2012 growth already takes the supplementary budget into account. As we project that the central bank will cut the key interest rate twice this year, the Korean economy will pick up fast from the second quarter,” Kwon said.

The Ministry of Strategy and Finance has said it will front-load 60 percent of this year’s budget in the first six months to boost growth.

“There may be a third quantitative easing by the U.S. Federal Reserve, and the European Central Bank and China are likely to cut their rates, leading to an increased inflow of foreign capital into Korea,” he said.

Nomura also predicted Korea’s main stock index, the Kospi, will climb as high as 2,050 this year, with the local currency expected to moderately appreciate to 1,100 won to the U.S. dollar.