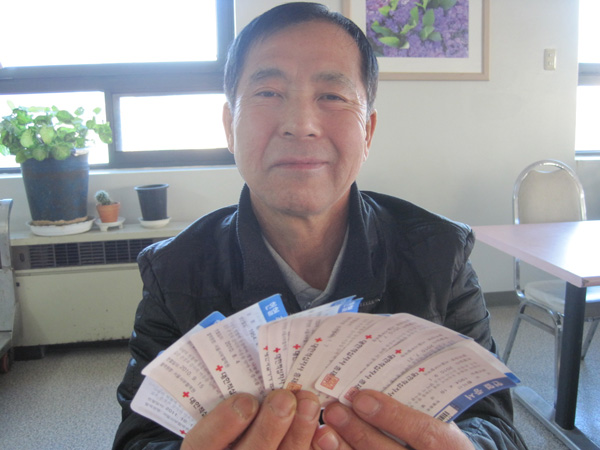 Hwang Eui-seon holds some of the blood donation cards he has earned over the years. He was recently inducted into the Korean Red Cross Blood Services’ hall of fame for making the most blood donations in Seoul. By Won Hi-young

As soon as the stocky 57-year-old man arrived at the blood donation center, three nurses greeted him simultaneously. In response, the man, who is about 165 centimeters (5 feet, 5 inches) tall with bulky arms, smiled awkwardly like a new singer responding to cheers from his fans.

That day, the star in question was Hwang Eui-seon, who was inducted into the hall of fame of the Korean Red Cross Blood Services (KRCBS). He holds the record for making the most blood donations in Seoul, having donated blood 574 times.

After shaking hands with every nurse he met, Hwang went through his usual routine. He put his belongings into one of the pink lockers and went into the blood test room. A nurse took a sample of his blood to determine his eligibility as a donor. While waiting for the results of the test, he picked some snacks from a pink snack table that the Red Cross provides for the donors.

As the nurse prepared a tourniquet and IV needle, Hwang lay down on one of the double-wide dentist chairs. Soon after, he was connected to a creamy-white Haemonetics machine, and his bright red blood rushed into a transparent plastic tube. The machine quickly filtered apheresis platelets from Hwang’s blood and sent the fluid into a bag.

“I don’t prepare for a donation,” Hwang said. “But I do care about my diet. I stay away from fatty foods for a few days before I donate.”

He said that the other day when he dropped into the center after having a lunch of samgyeopsal (pork belly), his temporarily high blood sugar level colored his platelet bag a turbid yellow.

“I know it doesn’t really matter whether my blood is somewhat greasy, but since I want to donate the best blood I can to whomever is in need of a transfusion, I pay attention to the things I can control,” he said. “Besides adjusting my diet, I bathe and put on clean clothes. And I always pray all the way to the center for the good use of my blood.”

Blinking his big eyes, he reflected on his first blood donation.

Hwang had joined the Korean Army as a staff sergeant in May 1975 and retired the year before last, after 37 years of service. When he was promoted to sergeant first class, the commander granted him leave to celebrate.

As Hwang was waiting for the train home at Yongsan Station, he came across a Red Cross mobile blood station, which had a large banner saying, “Your blood donation saves precious lives. Universal donors urgently wanted.”

Upon seeing the sign, Hwang found himself drawn to the truck.

From then on, Hwang has given blood twice a month. For the past some 40 years, he has donated blood more than 100 times and platelets and plasma more than 450 times.

“I believe that only those who are gifted can be professional soldiers and also blood donors,” Hwang said. “I feel blessed for being a person who meets all the eligibility requirements, and I’m glad because it means I’m always in good health.

“But not all healthy men can serve over 30 years in the army with pride in working for the nation. Likewise, not all seemingly healthy people can be blood donors.”

Being such a frequent donor has given Hwang a number of memorable moments.

He was invited to appear on the KBS 2 program “Great Country Movement Headquarters” in 2007 for making the most blood donations. Presidents Kim Young-sam and Kim Dae-jung both invited him to banquets at the Blue House for the same reason.

“Donating blood demonstrates one’s compassion for humanity,” Hwang said. “If we feel happy even when we help someone on the street, how much more of a boost would we receive by donating blood, which saves people’s lives?”

The KRCBS tests all donated blood not only for infections but also for many other elements, such as liver and renal function, albumin and cholesterol levels.

“I never get an expensive medical checkup that takes at least a quarter of a day,” Hwang said. “I get a thorough physical examination twice a month for free.”

Hwang also said he believes that donating blood is an act of patriotism.

“I saw on the news that Korea spent over $48 million to import blood in 2010,” he said, adding that donating blood is one of the best ways for Koreans to show their love for the nation. He believes his contributions will help reduce unnecessary government expenditures and that the only way to combat the domestic blood shortage is to encourage Koreans to become blood donors.

According to KRCBS, Korea has a sufficient supply of blood for surgical transfusions but depends largely on imports of blood plasma, which becomes the raw material for medicines and medical supplies. In order to fully meet the demand for blood donations, more than three million Koreans, or about 16 percent of the population, would need to donate annually. Yet only about 5 percent of Koreans donate blood per year.

“I’m not trying to glorify military life, by the way,” he said. “It really is tough and sometimes even tedious. Soldiers wake up at 6 a.m. and participate in roll call right after that. After breakfast, they do their daily tasks, which are almost always the same. The evening roll call starts at 9 p.m., so almost everybody has to be in bed by 10 p.m. The routine always follows the same pattern.

“Honestly, I couldn’t have spent my whole life alone like that. But I believe the spirit of community encouraged me to carry out the routine,” he said. “Donating blood is the same. I, alone, cannot handle the blood shortage, but the mission will be realized when other Koreans join in.”

Kim Jun-yeon, KRCBS’s safety management team leader, said there has been constant outreach for blood donors because blood products cannot be stored indefinitely. Since blood is an aggregate of organisms, the average age of blood used in transfusions has to be less than a month. Platelets have an even shorter shelf life.

He added that KRCBS predicts the blood shortage is likely to worsen since the number of potential blood recipients is increasing because of the growth of the elderly population.

On the same day, Hwang went in for his donation, two teenage volunteers were holding a blood drive in front of the blood donation center. They stopped people on the street, asking them to donate blood, and held signs saying, “Your blood donation saves precious lives. Type A and Type O wanted.”

“Donating blood is more than just drawing 400 milliliters of fluid out of the veins,” Hwang said. “It is a noble action that can save lives, and there are no strings attached.”