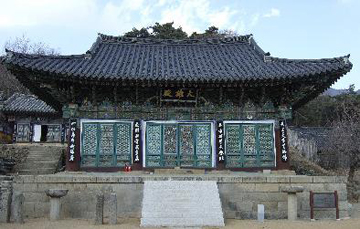 The main building of Donghwa Temple in Daegu. [JoongAng Ilbo]

It has all the elements of an inimitably Korean legend - a North Korean defector, buried gold and suspicious Buddhist monks serving as unwitting guardians of a 50-year inheritance - but a happy ending to this modern-day adventure story is far from guaranteed.

In late December, a 41-year-old North Korean defector surnamed Kim visited Donghwa Temple on Mount Palgong, Daegu, and told the resident Buddhist monks they were sitting on a gold mine - that belonged to him.

He claims his stepfather buried 40 kilograms (88.2 pounds) of gold bullion, worth 2.6 billion won ($2.24 million) by today’s prices, underneath the backyard of the temple’s main sanctuary after the outbreak of the 1950-53 Korean War.

The man said his 83-year-old stepfather tasked him with retrieving his inheritance when he learned of his son’s plans to defect from the North’s Hamgyong Province. 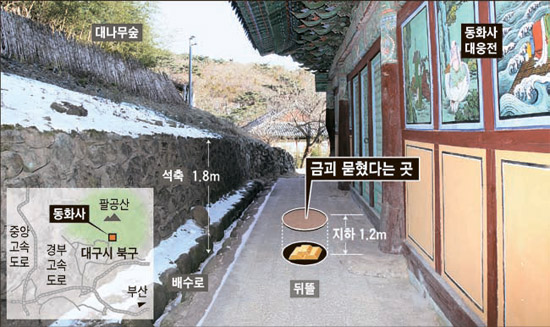 The older man stashed the loot at a time when Daegu looked set to be overrun by the North’s troops in the early stages of the war, Kim said. He claimed his stepfather was a wealthy landowner who sold his assets in exchange for the bullion but was unwilling to take his bounty with him.

But according to Kim’s attorney, neither the monks nor local government officials are prepared to let him start digging up one of the nation’s pieces of cultural heritage without a fight.

The attorney, who gave his surname as Bae, said Kim requires official permission from Korea’s Cultural Heritage Administration in order to conduct excavation work on the temple grounds, a project to which the monks have apparently expressed opposition.

This comes despite their earlier move to cooperate with Kim when he approached them with a metal detector asking if he could survey the terrain for hints of the buried treasure.

The search, carried out on Dec. 29, showed that something lay 1.2 meters (3.9 feet) below the surface with a different magnetic field than regular iron ore, but it was not clear if this was gold or another material.

Bae said that they were not able to start digging because the temple is currently registered as a national treasure.

“Kim said he was instructed to dig up the gold by his stepfather before he escaped the North in 2008,” Bae said.

“We will observe the situation carefully,” he said, adding that he “may consider bringing legal action.”

According to Han Dong-soo, a spokesman for the temple, this will not be necessary if Kim can provide firm evidence that the gold exists and belongs to him.

“At the moment, it’s pretty much just all guesswork,” Han said. “It is impossible to dig on ground that has been designated as a national treasure without any firm evidence.

“We told Kim and his attorney to show us hard proof that the buried material is gold. They also need to win approval from the cultural heritage agency.”

Han also said that the metal detector that Bae and Kim used was in fact an old mine detector, casting further doubt on what the mysterious metal nestled beneath the temple really is.

Kim Byung-doo, director of the cultural heritage division at the Daegu Metropolitan Government, said the project is currently on hold but that Kim still has a shot at getting his inheritance.

“For now, there is no way that Kim and Bae can start digging,” he said. “But we will discuss the issue with the heritage agency if the temple submits a petition requesting the excavation work.”