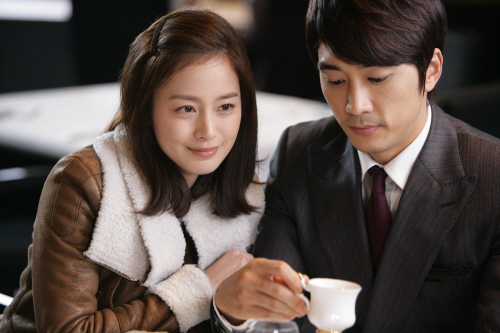 
Actors Song Seung-hun and Kim Tae-hee touched down in Hanoi on Jan. 6 to participate in events promoting their MBC drama “My Princess” and a fund-raiser for disadvantaged children.

The drama will begin airing in Vietnam on Jan. 17 on the nation’s SCTV channel.

During their two-day visit, the entertainers made appearances at various press conferences and fan meetings in a bid to promote the television program.

On Saturday, they participated in a fund-raiser attended by 200 VIPs and 100 fans at the National Convention Center in Hanoi. Guests forked over between $80 and $100 for the privilege of attending the event, where Song and Kim auctioned off outfits they’ve worn on the show.

According to a representative from Song and Kim’s agencies, all proceeds from ticket sales and auctioned items were delivered to the National Fund for Vietnamese Children.