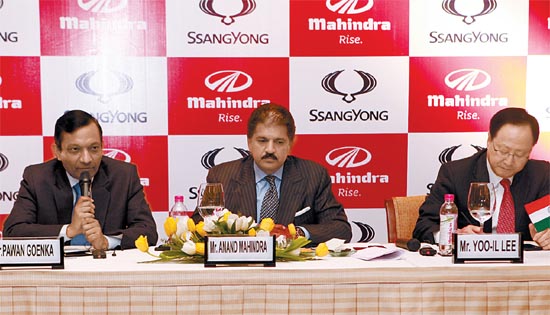 From left, Dr. Pawan Goenka, president of the automotive and farm equipment sectors at Mahindra & Mahindra and chairman of Ssangyong; Anand G. Mahindra, vice chairman and managing director of Mahindra; and Lee Yoo-il, CEO of Ssangyong, speak to the press at the Taj Mahal Hotel in central New Delhi on Saturday. Provided by Ssangyong Motor


NEW DELHI - In an effort to broaden collaboration Ssangyong Motor and its parent company Mahindra & Mahindra will develop and share their auto platforms.

The two companies are launching four new models based on those platforms by 2016, hoping to increase joint global procurement and distribution, Anand G. Mahindra, vice chairman and managing director of Mahindra & Mahindra, told the press during the Delhi Auto Expo 2012 in New Delhi on Saturday.

“What is most important is product development,” Mahindra said. “Future products will come out of common platforms to increase synergy. We also started doing common sourcing for components in both India and Korea and intend to maximize the volume.”

Also present at the press meeting at the Taj Mahal Hotel in central New Delhi were Dr. Pawan Goenka, president of the automotive and farm equipment sectors at Mahindra & Mahindra and chairman of Ssangyong, and Lee Yoo-il, the CEO of Ssangyong.

“We have now decided to work on two or three platforms,” Goenka said. “These platforms will be shared by both Mahindra and Ssangyong and the development cost will be divided between the two companies.”

Goenka added that Ssangyong plans to launch five new variances of existing models by 2013 and Ssangyong and Mahindra will jointly launch four new models by 2016.

“We believe that all these products will lead Ssangyong’s growth.”

“It costs 250 billion won ($215 million) to 300 billion won to develop a new vehicle,” said Lee of Ssangyong. “When we developed the Korando C, it cost us 300 billion won. At that time [before Ssangyong was acquired by Mahindra], we didn’t have enough money and had to sell real estate. With Mahindra’s acquisition of Ssangyong, our debt was reduced. If we can meet our sales target, we’ll be able to support our own R&D.”

Goenka said future products jointly developed by the two companies will aim at global markets and cooperation in R&D will significantly reduce their total R&D spending.

“One plus one is not two but 11,” Goenka said, speaking of the future synergy from Mahindra’s acquisition of Ssangyong.

“We’ve been investing 2 percent to 3 percent of our global sales in research and development,” Goenka said. “In the past, Ssangyong spent 270 billion won to develop a new product while Mahindra spent 150 billion won to 180 billion won. Now Mahindra and Ssangyong are working together in R&D, it will help us reduce investment in developing new platforms.”

Speaking of Ssangyong’s ability to finance its own investment, Goenka said, “There are several sources to raise capital, such as debt issuance. However, if necessary, we’ll make the necessary investment. The company [Ssangyong] is debt free and we are able to find money within the company.”

The top management at Mahindra was upbeat as Ssangyong’s production grew 38.2 percent on-year in 2011 to 113,000. Ssangyong expects a 9-percent increase in production this year. Mahindra will start producing the Rexton, a full-size sport utility vehicle developed by Ssangyong, in India in the latter half of this year.

Ssangyong will export most of the components to India before they are assembled at the Chakan plant in Pune.

This would be the first product resulting from their collaboration after Mahindra’s acquisition of Ssangyong in late 2010. Korando C will be also manufactured in India by Mahindra a year from now.

“As you are aware, the market for premium SUVs that cost over $35,000 in India is very small,” Goenka said. “We don’t expect a very large volume but we can see a good market share in the segment.

“This means that India will be the second biggest export market for Ssangyong.”

In addition, Mahindra and Ssangyong are working on joint distribution. Ssangyong and Mahindra products will be sold together in South Africa and then in Russia, Goenka said.

“What I would like to see is for people to stop comparing the previous owner with Mahindra,” Goenka said.

“We are not looking to just turn a quick profit. We are a different kind of company. I hope that Korean people see it differently.”