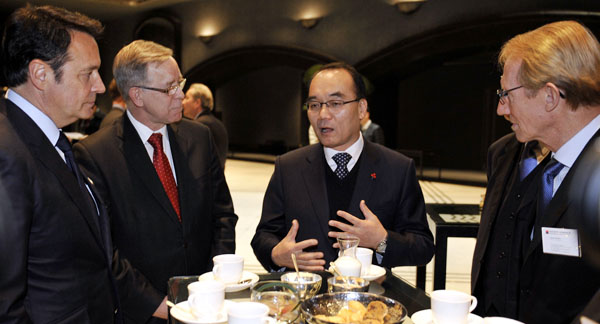 
Korea will beef up efforts to provide a better business environment for foreign enterprises by “actively” reflecting their opinions in its policymaking process, the nation’s finance minister said yesterday.

“We will actively reflect the opinions of the EU Chamber of Commerce, and make redoubled efforts to improve areas such as investor protection and property rights registration,” Bahk Jae-wan told a gathering of European business people.

Bahk promised to push ahead with measures to lower land rents and make conditions more foreigner-friendly so foreign companies can do business in better management and living conditions.

He added that the free trade agreement between Korea and the EU, which went into effect in July last year, will benefit both regions by diversifying export industries highly dependent on certain countries and helping lower inflation.

The FTA can also act as a “driving force” for creation of jobs and income by boosting investment and expanding trade, especially in the service sector, he noted.

The minister urged the EU to use Korea as a “hub” in East Asia, through which it can introduce its advanced service industries and increase the share of its products in the region.

Bahk also said there are new countries considering whether to invest in the bond market here, emphasizing he will closely cooperate with their central banks to minimize any possible volatility from increased capital inflow. The government will make efforts to encourage long-term investments and expand the size of the overall capital market aimed at easing shocks from massive money flows in and out of the nation, he added.