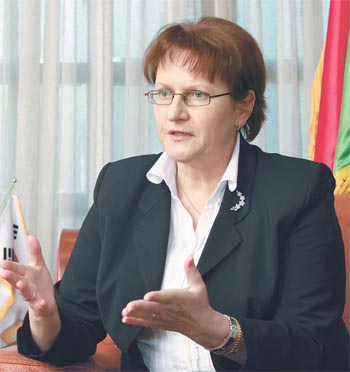 Natallia I. Zhylevich, Belarussian ambassador to Korea By Park Sang-moon

There is much to learn from Korea’s advances in nuclear production, research and safety measures, the top Belarussian envoy in Seoul stated after visiting Korean nuclear power plant facilities in December, especially in regards to the development of the first nuclear power plants in Belarus within the next six years.

Natallia I. Zhylevich, Belarussian ambassador to Korea, sat for an interview with the Korea JoongAng Daily on Dec. 22 following a visit to Korean nuclear facilities responsible for research, production and regulation.

“I was very much impressed by the level of the development in technology, energy production, construction and of course in the research on nuclear energy,” Zhylevich said. “I know that the Korean researchers and engineers upgraded and are still upgrading the technologies that Korea’s nuclear plants possess.”

Between Dec. 5-6, the Korea Nuclear International Cooperation Foundation, a nonprofit organization founded in 2004 specializing in bilateral and multilateral cooperation in nuclear activities, hosted the “2011 Nuclear Technical Visit Program for Diplomats” under the auspices of the Ministry of Education, Science and Technology.

Of the diplomats invited included the ambassadors of Belgium, Belarus and Argentina, who were provided a rare opportunity to visit nuclear energy facilities and institutions that included the Korea Atomic Energy Research Institute; the Korea Institute of Nuclear Safety; Doosan Heavy Industries and Co.; and the Kori Nuclear Power Plant site in Gori, Busan.

It was the Belarussian ambassador’s first time visiting a nuclear power plant, though she had seen nuclear installations previously as her previous post in the Foreign Ministry was connected to nuclear corporations.

Belarus plans to have its first 2,400 megawatt nuclear power plant ready to operate by 2017 and another one the following year.

Zhylevich expressed that while Belarus is home to well-developed nuclear science, “the country does not yet have the industrial capacities to construct a nuclear power plant.” The government signed a special agreement with Russia a couple of months ago to assist with the project.

While the Belarussian government held negotiations with Korea, inviting companies to participate in the construction of the power plants, “at the time the negotiations were not a success,” the ambassador said. “I hope Korea will be more interested when we start constructing our next units.”

Ambassador Zhylevich referred to how both Korea and Belarus were victims of great nuclear disasters occurring in a neighboring country.

“I think both Belarus and Korea can share our experience in this sphere,” Zhylevich said.

The 1986 Chernobyl disaster in Ukraine, considered one of the worst nuclear power plant accidents in history, heavily contaminated areas of Belarus, Ukraine and Russia. The Fukushima Daiichi nuclear disaster in March of last year is the largest nuclear crisis since Chernobyl.

Over the past 25 years, the Belarussian government has allocated over $32 billion to overcome the aftermath of Chernobyl, according to the ambassador.

“The international community assisted us a lot but it was a small modicum of what we did with our own hands, and we felt that we were strong enough not just to overcome it but to move forward. .?.?. Nuclear and environmental science are well developed because of Chernobyl.”

In regards to her visit to the Korea Institute of Nuclear Safety and the plant, the ambassador stated, “I can see how open the people who work there are. Their contact with the general public, with mass media, with foreigners, is striking.

“We suffered greatly after the Chernobyl disaster and a great part of the fallout contaminated the land of my country. It is exactly the reason that I mentioned the people working in Kori are open to the public - because the information about the Chernobyl disaster was kept a secret, and the survivors were not so much afraid of the aftermath, but rather of being left unattended.”

The ambassador stated the nation’s reasons for nuclear power plant construction are the same as Korea’s. Belarus is a geographically level country situated on a plain, with calm rivers and limited natural resources.

“We don’t have winds that can produce alternative energy, and we don’t have oil or gas,” the ambassador said. “Very much like Korea, we need a stable source of energy, and at present, nuclear energy is the only possibility that produces energy and protects the environment.

“There are still lots of people who have a phobia of nuclear energy,” the ambassador said, but today some 70 percent of the general public in Belarus supports having their own nuclear power plant.